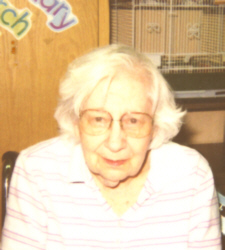 A lifetime Marshall County resident, Vivian Caldwell, 89, of LaPaz, Ind., died at 1:00 p.m. on Tuesday, November 27, 2007, in Pilgrim Manor Nursing Center, 222 Parkview St., Plymouth, Ind.
Born at Lake of the Woods on Nov. 12, 1918, Vivian was the daughter of Floyd and Zula Kaufman Maxon.
She attended LaPaz schools.
She was first married to Francis Rankert of Plymouth. Francis died on June 24, 1980. She later married Harvey Caldwell in LaPaz on June 21, 1983.
Vivian worked in the North Township Assessors office, retiring in 1983.
Harvey, Vivian’s husband of 24 years, LaPaz, survives her death, together with her daughter, Linda Galloway of Mishawaka.
A grandson, Bruce (Rachel) Stump, LaPaz, a granddaughter, Lisa (Mark) Keel, Alabama, and five great-grandchildren also survives.
A brother, Dennis Maxon, Plymouth, and three sisters survive as well. They are: Audrey Keller, Fort Wayne: Marge Bowen, Plymouth: and Phyllis Rinkingberg, Fort Wayne.
In addition to her parents and her first husband, Vivian was preceded in death by two brothers: Richard and Floyd Maxon, Jr.
Friends are invited to celebrate Vivian’s life with her family on Thursday, November 29, 2007, from 4:00 to 8:00 p.m. at the Johnson-Danielson Funeral Home, 1100 N. Michigan St., Plymouth.
Funeral service will be in the funeral home on Friday, November 30, 2007, at 1:00 p.m. The Rev. Stephen Cox, pastor of Cornerstone Community Fellowship Ministries, LaPaz, will officiate.
Burial will be in New Oakhill Cemetery, Plymouth.
Memorial gifts in Vivian’s memory may be made to Cornerstone Community Fellowship Ministries.