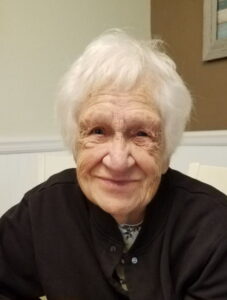 Vivian Jean Shidler, 94, of Plymouth and formerly of Edwardsburg, Michigan, passed away Thursday, September 12, 2019, at the We Belong Senior Home in Plymouth.
Vivian was born February 22, 1925, in Plymouth, Indiana, to the late Lester and Edna (Creighbaum) Wade.
On December 16, 1943, in Plymouth, she married Harry Eldon Shidler whom she was married to for 72 years when he passed away in 2016. After his passing, Vivian moved into We Belong Senior Home in Plymouth. She and her family were blessed by their wonderful and caring staff.
She graduated from LaPaz High School in 1943. She was a proud Navy wife of Harry, and they had three sons, and one daughter, Eldwyn, Bruce, Leslie and Susan. Vivian and Harry spent many happy winters in Avon Park Florida. She enjoyed crocheting and reading before her eyesight failed. She spent many hours frying bluegills that Harry had caught. Surviving are Vivianâ€™s sons; Eldwyn (Sue) Shidler of Sacramento, California, Bruce (Cindy) Shidler of Plymouth, Leslie (Tina) Shidler of Elkhart, eleven grandchildren, fourteen great-grandchildren. She was preceded in death by her beloved husband Harry, her parents, her daughter Susan Jean Shidler, and a sister Lura Cline.
Per her wishes, all services are private.
In Lieu of flowers, memorial contributions may be directed to We Belong Senior Home 300 Meadow Lane Plymouth IN 46563