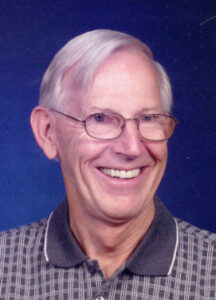 W. Michael Smith, 72, a resident of Plymouth, passed away at his residence on Monday, October 15, 2012 at 10 a.m. following a lengthy illness.
Mike was born in LaPorte, Indiana on February 22, 1940, the son of Walter M. and Mildred Ruth (Nash) Smith. He attended Urey High School. From there he entered the United States Air Force as a communications specialist.
Following his honorary discharge in 1966, Mike went to work for General Telephone in Hobart, Indiana as a lineman. He retired from United Telephone’s Plymouth office in 2005 as a central office supervisor.
His entire life he has loved electronics and used his talents to create and perfect items such as the big screen TV that he built in the 1980’s well before they went on the market. He attained his private pilot’s license and then built his very own gyrocopter. Mike loved his family, watching old movies and the Sci-Fi Channel along with the Bears and Colts games. His interests in travel especially Hawaii took him to nearly every State in the Union. He and his late wife Anna were especially fond of Cumberland Lake in Kentucky.
On September 10, 1960, in Walkerton, he was first married to the former Judith K. Norton. He then married Anna B. Hayes on January 27, 1996 in Russell Springs, Kentucky. Anna proceeded in death on November 12, 2010.
Mike is survived by his children and families: Gerald M. and wife Ginger Smith of Peru, Indiana and their children; Ben, Lauren, Jarid and Joel. David A. Smith of Bloomington, Indiana. Ann M. and husband Jeffery Babcock of Plymouth and their children; L.Cpl. Cameron Babcock, USMC (dec’d), Abigail, Hope, Samuel and Kailey (Mrs. Kenneth) Bandimere with great-grandson Kaleb. Three sisters and a brother include: Grace (Mrs. Richard) Noone of Walkerton, Sherrill (Mrs. Richard) Kickbush of Branson, Missouri, Ann (Mrs. Jim) Miller of Walkerton, and Jimmy (Diane) Wood of Eau Claire, Michigan.
Visitation will be held on Thursday, October 18th from 5 – 8 p.m. in the Johnson-Danielson Funeral Home, 1100 N. Michigan St. Plymouth. Services will be held in the funeral home at 11 a.m. on Friday, October 19th with visitation one hour prior to services. The Reverends John Branch and Ed Friberg will officiate.
Burial with Military Honors provided by members of the Plymouth American Legion Post 27, Veterans of Foreign Wars – Marshall County Post 1162 and the D.A.V. will be in the New Oakhill Cemetery, Plymouth.
Memorial gifts may be given to the Center For Hospice Care – Marshall Co., 112 S. Center St., Plymouth, IN 46563.