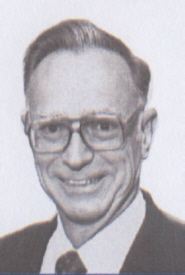 Wallace E. “Wally” Summerville, 87, a resident of Fairfield Farms, Plymouth, passed away at 5:40 a.m. on Thursday, May 1, 2014 in the St. Joseph Regional Medical Center – Plymouth Campus.
Wally was a gentleman leader who gained the respect of many during his career with the Marshall County REMC which spanned 39 years retiring in 2010 as the General Manager/CEO, a position he was appointed to in January of 1988. He was born on April 25, 1927, the son of Oliver W. and Ruth (Keller) Summerville in the small southern Indiana depot town of Burns City. He graduated from nearby Loogootee High School in 1945 and earnestly studied at Indiana University, Bloomington to attain a B.S. Degree from the School of Business. It was noted at the time of his graduation in 1951 that he desired a possible position in a Management General Training Program, Production Control or Time and Motion Study.
His career humbly started though as a clerk in the General Store owned by his parents. From there he became a clerk at the U. S. Post Office and then the U.S. Naval Ammunition Depot in Crane, Indiana. Wally also served as president of the Jaycees.
During WWII he enlisted in the Army Air Forces and was very proud of his military record and Wally loved serving for his country. He trained as a field agent in purchasing and contracting. Wally was stationed in Texas, Washington and Germany. He long credited his military service with providing him the skills to manage and lead effectively. They cited him with the following characteristics: perseverance, speed, honesty, accuracy, dependability, leadership and tact. He continued to serve in the Air Force Reserve and ultimately retired with the rank of Colonel.
Wally began his career in the Electric Cooperative industry as Office Manager at Wabash County REMC located in Wabash, IN. Wally was one of the original founders of the Wabash Valley Power Association. In 1972 he assumed the position of Office Manager/Bookkeeper in Marshall County and then promoted to Assistant Manager. On January 4, 1988 he was elevated to Manager/CEO. With forward thinking leadership, he assembled employee teams who served the Member/Owners capably and efficiently. In 2010 as a proponent for and advocate of the REMC vision, he received the Regional Award for Outstanding Service and retired later that year. To Wally, REMC was like family.
A 63 year member of Moore Lodge #303 F. & A.M. Masonic Lodge in Odon, Indiana, Wally was well read on this and many subjects. He enjoyed visiting with people and traveling to various Air Force Bases.
He is survived by a nephew John Summerville of Madison, Wisconsin, a grandnephew Colin Summerville of Muncie, Indiana, a niece by marriage, Margaret Summerville of Martinsville and longtime special friend Mildred Gorney of Griffith, Indiana.
He was preceded in death by two brothers; Robert and John Summerville and a nephew David Summerville.
Wally will be remembered Monday evening May 5th from 4 – 7 p.m. in the Johnson-Danielson Funeral Home, 1100 N. Michigan St., Plymouth. At 7 p.m. following visitation in the funeral home members of the Plymouth-Kilwinning Lodge #149 F. & A.M. will provide a memorial rite. Funeral services will immediately follow presided by Rev. Jeff Herron, assistant pastor of the First United Methodist Church, Plymouth.
Wally’s wish to be buried in a National Cemetery will be granted at the Marion Indiana National Cemetery with full military honors scheduled to begin at 11 a.m. Tuesday, May 6th. The cemetery is located on Indiana Avenue in Marion, Indiana.
Memorial gifts may be directed to the Scholarship Fund of the Plymouth-Kilwinning Lodge #149, P.O. Box 173, Plymouth, IN 46563, the Moore Masonic Lodge #303 or the Wounded Warrior Project, PO Box 758517, Topeka, Kansas 66675.