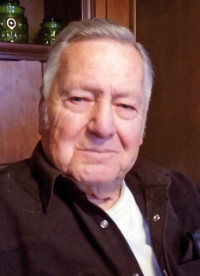 Walter A. “Mike” Taylor, 91, passed away on December 4, 2019.
Walter was born on September 27, 1928 to Thomas and Mae (Walterhouse) Taylor in West Township. He attended Plymouth schools through the 8th grade. Mike and Irene (Lacher) were married on August 29, 1947 by Rev. Paul Marsh of the First Christian Church, where they were members. Mike was a lifelong resident of Plymouth and lived in the same house that he started building in 1947.
He was in the concrete business for 30 years and retired from DelMonte in 1987. After retirement he had a sandpaper and abrasive business.
His hobbies included working and going to sales and tractor shows. He was fond of antique Ford equipment. Mike was a self-made man, and when he had a job to do, he made sure that it got done. He was “a man to be and is admired by his wife, family and friend”. Mike is survived by his loving wife of 72 years, Irene, of Plymouth and their son, Michael (Rosemary) Taylor; grandsons, Robby and Evan (Stephanie) Taylor; three step-grandchildren: Misty, Larry and Aaron, all of New Castle; and sisters and brothers-in-law: Lu (Bill) Town of Bremen, Shirley Cox of LaPaz, Wayne (Joyce) Lacher of Plymouth and Larry Lacher of Plymouth. He was preceded in death by his parents and siblings: Dorothy, Thelma, Roma, Richard and Ervin.
A Celebration of Mike’s Life will be held on Tuesday, December 10, 2019 at 1 p.m. in the Johnson-Danielson Funeral Home, 1100 N. Michigan Street, Plymouth, with Pastor Steve Cox and Brian Lacher officiating. Visitation will be from 11-1 p.m. in the funeral home prior to the service.
In lieu of flowers, memorial contributions can be made to Cornerstone Community Fellowship-Project Fund, 4291 Michigan Road, Plymouth, IN 46563.