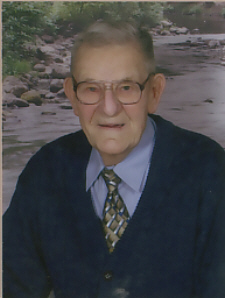 Walter DeMien, 89, of 4012 Michigan Road, Plymouth, died at Miller’s Merry Manor, Plymouth, at 1 p.m. on Monday, December 15, 2008. He had been a Plymouth resident since the 1930’s.
Born in LaPorte, IN., Walter was the son of George and Cecel Yocum DeMien. He graduated from Phillips, South Dakota High School and served in the United States Army’s infantry in Germany during WWII. He was discharged as a Staff Sgt. in 1944.
In May of 1946, Walter and Mary Heyde were married in Plymouth.
He worked at Bendix in South Bend for 31 years as a brake packer, retiring in 1979, and was a part-time employee for Price’s Nursery for 47 years.
Walter enjoyed spending time with his family and friends. A dedicated traveler, he enjoyed visiting all of the states with the exception of Alaska and Hawaii.
A member of the LaPaz American Legion, he displayed military medals of all kinds and had a nursery of his own. He also was a long time member of the North Salem Church of God, where he had been a Deacon, Trustee, and did the lawn maintenance and landscaping.
Walter is survived by his wife, Mary and their two sons and a daughter: Glen (Linda) DeMien, Nappanee, Jim (Virginia) DeMien, Plymouth, and Shirley (Tim ) Pearson, Plymouth.
Eight grandchildren and 14 great-grandchildren also survive.
Two brothers, Wallace T. and Marian DeMien, Peru, IN., and Fred G. and Helen DeMien, St. Charles, Ill., together with a sister-in-law, Marjorie DeMien, Plymouth and a brother-in-law, Kenneth Alwine, LaPaz, also survive along with several nieces and nephews.
Walter was preceded in death by his parents, two great-grandchildren: Cora and Cole Webb, two brothers: Elsworth DeMien and Gene DeMien, Sr., and three sisters: Henrietta Beghein, Doris Julia Milkey and Carrol E. Alwine.
Friends are invited to celebrate the life of Walter DeMien from 4 to 8 p.m. on Thursday, December 18, 2008, and after 7 a.m. on Friday, December 19th, at the Johnson-Danielson Funeral Home, 1100 N. Michigan St., Plymouth.
Funeral services for Walter will be held at 2 p.m. on Friday, December 19, 2008, in the funeral home with the Rev. Darrell Cardwell, pastor of the North Salem Church of God, will officiate.
Military graveside ceremonies in the New Oakhill Cemetery, Plymouth, will be provided by the Plymouth American Legion and V.F.W. organizations.
Memorial gifts in Walter’s memory may be made to the North Salem Church of God.