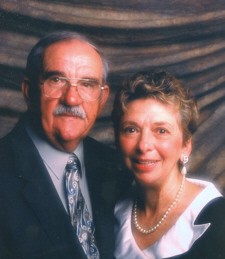 Walter J. “Wally” Wozniak,76, living at 10181 Quince Road, Plymouth, for the past 12 years, coming from Northbrook, Illinois, died at 2:45 a.m., following a brief illness, in Memorial Hospital on Tuesday, November 7, 2006.
He was born in Chicago on December 14, 1929, the son of Walter T. and Caroline (Sosin) Wozniak.
He graduated from Chicago’s Morgan Park Military Academy and attended Northwestern University, studying accounting.
In 1953, Wally was serving as a Sergeant in the United States Army in Germany. He was an assistant to the chaplain. From having served his comrades in this position he became the Godfather to literally 100’s of service born children.
Wally and Rosemarie Palumbo met when they were co-workers sharing lunch at the People’s Gas Light and Coal Company in Chicago. Wally always liked the lunches that Rosemarie’s mother made for her.
They fell in love and on January 26, 1957, in the Chicago Parish of the Church of the Resurrection, Wally and Rosemarie were married. Wally retired from an Evanston, Illinois, retail shoe business in 1994, and the couple made Plymouth their home.
For the past eight years he was a courier for Saint Joseph Regional Medical Center, Plymouth. Not only did he perform a necessary service, he loved what he did and everyone he came into contact with.
A very active person, Wally could be counted on to help anyone out. He was a willing volunteer with many worthwhile projects.
He adored his wife, children and grandchildren. He enjoyed traveling with Rosemarie to Florida in the winter. Designated to be the family cameraman, Wally somehow managed to position himself so as to leave his signature, ‘mirror shot’ in nearly all family footage.
A private person in many ways, Wally forever had a joke; he had a great sense of humor and could always make people laugh. He enjoyed being with friends – playing golf and cards—especially gin rummy—although he admittedly wasn’t very good at it. He loved football and baseball and was a Cub and Bear fan and an enthusiastic supporter of the Plymouth Country Club.
In Chicago, Wally was a member of the Knights of Columbus and a devoted parishioner of St. Michael Catholic Church, Plymouth. He was a Plymouth Moose 741 member as well as a life member of the VFW Marshall Co. Post 1162. Rosemarie, Wally’s wife of nearly fifty years, survives along with their three children and their spouses. They are Walter J. “Jay” and Linda Wozniak, Crystal Lake, Illinois: Karen M. and Ben Kraszyk, Plymouth, Indiana, and Julie and John Haeffele, East Peoria, Illinois.
Nine grandchildren survive as well. They are Jake, Ryan, Emily, Ben, Jon, Nicholas, Morgan, Abby and Megan.
A sister and her husband, Wanda and Ted Sanders of Glenview, Illinois, a brother-in-law and sister-in-law, Bill and Sue Palumbo, Plymouth, Indiana, and a sister-in-law, Sarah Palumbo, Scottsdale, Arizona, survive also, along with several nieces and nephews.
Wally was preceded in death by his parents, his dear mother-in-law, Marie Palumbo and a brother, Stanley Wozniak.
Friends will be welcomed by his family to celebrate the life of this special man who will always be remembered for his loving devotion to his family, friends and community on Saturday, November 11, 2006, from 9:30 to 11 a.m. (Eastern Standard Time)in St. Michael’s Roman Catholic Church, 625 N. Center St. Plymouth.
A Mass of Christian Burial will be held following visitation at 11 a.m. (E.S.T.)in the church. The Rev. Father William Kummer, pastor of the church, will officiate. Military honors will follow, provided by American Legion Post 27.
In lieu of flowers, memorial gifts in Wally’s name may be made to the Michael J. Fox Foundation – Parkinson Research, P.O. Box 4777, New York, NY 10163 or the Epilepsy Foundation, 4351 Garden City Drive, Landover, MD 20785.