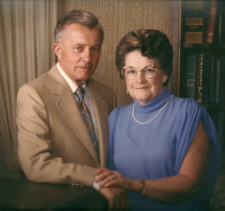 Walter Murray “Walt” Danielson died as he had wished, in his home of the past 42 years – as he would say, “in the old Rudd place on the hill,” 12921 Plymouth-Goshen Trail, at 5:15 a.m., on Monday, November 13, 2006.
Walt proved to be… ‘A tuff ole Swede’ and died of natural causes at the age of 93.
Those who knew him remember him for his conviction to working long and hard, along with doing it right the first time.
He was born the son of Charles L. and Gertrude E. (Ailes) Danielson in Kouts, Indiana on August 2, 1913. His mother Gertrude would die at a very young age leaving three small children. Walt soon dropped out of the Boone Grove School in order to help his father on the farm.
On June 27, 1936, in St. Mary’s Catholic Church in Kouts, Walt and Lucille O. Redelman were married. At his passing Lucille was again at his side – his loving wife and best friend, as she was throughout their 70 years together.
The young couple moved to Valparaiso and Walt got a job with a Valparaiso ice cream company. For a time, both he and Lucille worked in the Continental Diamond Factory. He then took a job with McGill’s Manufacturing.
The Danielson’s moved to Plymouth in 1948. Walt bought a Borden’s milk route and hauled milk from local dairy farms to the plant in Hammond, Indiana. In the early morning hours, Walt would drive to many local dairy farms picking up first the old “collector” cans of milk, then bulk and later delivering packaged milk until 1977 under the name Danielson Milk Transport.
He loved and respected the road and was awarded the American Trucking Association, Safe Driving Award for driving over a million miles accident free… all the while seated on a well worn piece of plywood. He and his “Gimmy” diesel retired from the Warsaw Trucking Company in 1986, at the age of 73. When it came time to lay all driving aside, he simply slid over and asked ‘Ma’ to drive.
Over the next 20 years he could be seen on nearly a daily basis tending to his garden, lawn or out buildings. He was reported more than once to be standing on a step ladder cleaning gutters at the age of 90.
Walt and Lucille have traveled to Florida, the western states of Texas and Arizona, and east through New England, Newfoundland and specially enjoyed Nova Scotia.
A member of St. Michael Roman Catholic Church for over 58 years, Walt is also a member of the Knights of Columbus, Council 1975.
He is survived by his devoted wife, Lucille, and by their six children and families along with personal care-giver and friend; Mirtha Guerrero.
Children are: Robert C. and Barbara Danielson of Plymouth and their children, Tim & Kellie, Scott & Yunhan, and Stacy & Pat: Rodney P. and Michelle Danielson of Brunswick, Georgia and son, Rodney Michael: Darla S. and Evan Gast of Lakeville and their daughter, Lindsay: Reginald M. Danielson of Plymouth and his daughter, Brianne: Randall L. and Eleanor Danielson of Plymouth and their children, Olivia, Renee, and Mark and Roger A. and Cindy Danielson with children Braxdon and Trevor, all of Plymouth. Five great-grandchildren also survive: Mitchell, Madison, Lily, Matthew, and Ian.
A sister, Florence ‘Ann’ Birky of Goshen and numerous nieces and nephews survive as well. Walt was preceded in death by his parents, a brother, Chauncy E. Danielson, an infant sister, Daisy Danielson and an infant grandson.
The family will welcome friends to celebrate Walt’s life from 3 – 8 p.m. Wednesday, November 15, 2006 in the Johnson-Danielson Funeral Home, 1100 N. Michigan St., Plymouth. Calling will continue after 7 a.m. Thursday until time of services. A Rosary will be recited at 7:45 p.m. Wednesday evening.
A Mass of Christian Burial for Walt will be held in St. Michael’s Roman Catholic Church at 11 a.m. Thursday. The Revs. Fr. William Kummer and Fr. Manuel Evangelista will officiate.
Burial will follow in New Oakhill Cemetery.
Memorials to Walt’s memory may be made to St. Michael’s Catholic School Tuition Assistance Fund, Center for Hospice and Palliative Care or Donor’s Choice.