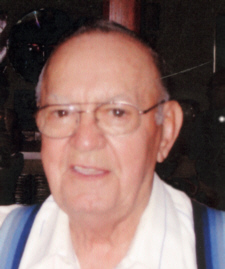 Walter L. Maybee, 81, 5704 Michigan Road, Plymouth, died of natural causes in Memorial Hospital, South Bend, on Saturday, August 22, 2009, at 11 p.m.
Walter was born on October 7, 1927, in Soldiers Grove, Wisconsin. He was the son of Roy Maybee and Florence Hutchcroft.
Walter attended Soldiers Grove schools in Wisconsin.
He served in the United States Navy during World War II, from 1944 to 1946.
On August 16, 1947, in Soldiers Grove, Walter and Betty Swiggum were married. Betty died on February 28, 1997.
Walter was a Teamster truck driver from A.B.F. for 30-plus years and was awarded honors for driving over two million miles without an accident.
He was a member of the Moose Lodge, the VFW Post 1162, and the American Legion Post 27. He attended the Blissville Church of the Brethren.
Walter is survived by a daughter and three sons. His daughter is Valerie Hoefert, Pine Mountain, Georgia. His sons are: Gary (Vicki) Maybee, Lonnie Maybee and Kim (Debbie) Maybee, all of Plymouth.
Grandchildren surviving are: Gary and Vicki’s children: Tammy (James) Radican: Jan (Mary Lee) Gustafson and Beth (Tom) Kollars.
Valerie’s children are: Tina Harness and Jeremy (Christy) Harness.
Mary Rodriquez, his lifetime companion, also survives, together with three sisters: Imogene Turban, Fairyville, Wisconsin: Alice Turban and Pauline Skrade, all of Soldiers Grove, Wisconsin.
Walter is also survived by Mary’s children, Mary Jane Conlreras, Wanda Farrar, Bill Russell, Larry (Carol) Rodriquez and Richard (Brenda) Rodriquez. He is also survived by numerous great grandchildren.
Walter was preceded in death by his wife, Betty, a son, Robert and two sisters, Shirley and Beverly.
The family will receive friends on Wednesday, August 26, 2009, from 4 to 8 p. m. in the Johnson-Danielson Funeral Home, 1100 N. Michigan St., Plymouth.
The funeral for Walter, conducted by the Rev. Wilson Shabaz of the will be held in the funeral home at 11 a.m. on Thursday, August 27, 2009.
Full military graveside honors will be accorded to Walter by the VFW Post 1162 and the Plymouth American Legion Post 27 at the Tyner Cemetery, Tyner, Indiana.
Memorials in Walter’s memory maybe given to the Marshall County Cancer Association or the American Lung Association.