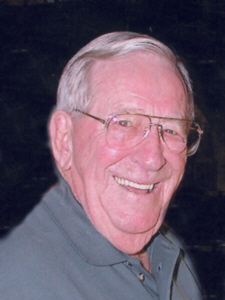 Walter “Wade” Wyatt, 96, 10320 Pretty Lake Trail, died of natural causes in Miller’s Merry Manor, Plymouth, at 9:45 p.m. on Sunday, September 21, 2008.
His kindness, wit and generosity of spirit endeared Wade to everyone who knew him. His trademark was his red socks. No matter what other colors he was wearing, red socks gave him his jaunty look and complemented his engaging smile.
Born to Walter and Nola Conlee Wyatt on July 21, 1912, in Ina, Illinois, Wade graduated from Roosevelt High School in East Chicago, Ind., with the class of 1930. He worked for a time for the Empire Oil Co. as a steam fitter’s helper and later at city Service, both in East Chicago. Married in 1933, to Kay, his high school sweetheart, the couple, after a short stint in west Texas, moved to Bourbon, where Wade worked for the New Way Lumber Co.
In the early months of 1944, Wade joined the United States Marine Corps and served in the Pacific Theater with MAG 25, the Marine Air Group, flying transport planes.
A decorated veteran, he was honorably discharged in June of 1946.
Wade managed, for more than 20 years, the Bourbon Lumber and Coal Company. In 1960, he went on the road for the Freed Wholesale Lumber Company. In 1974, at the age of 62, he retired.
For one year. He said that “one year of playing solitaire was enough.”
For the next 22 years he worked as a salesman and quality control officer for Shamrock Homes in Plymouth. Up until his 86th birthday, he still went into the office part time.
Wade first wife, Kay, died in 1980. In 1982, he married Dolores “Dee” Adams, who died in 1998.
A great card player and fantastic golfer, Wade belonged to the Moose Lodge, the VFW, and the American Legion. He was the oldest member of the Plymouth Country Club and at the age of 85, had been crowned the senior champion in a golf tournament, besting men players in their 50’s, 60’s and 70’s.
Wade is survived by his daughter and son-in-law, Lynn and Al Hartman, Plymouth and by two grandsons, Chad (Sherry) Rapp, Bourbon and Matthew (Sheri) Rapp, and two Great Grandsons Ryan Rapp of Bourbon, and Trenton Rapp of Warsaw.
Step-daughters Toni (Dave) Parsons and Chris (Moe) Conn, three step- granddaughters Emma of Muncie and Tessa Parsons of Plymouth, Brooke Conn, Corbin, Kentucky and two step-grandsons, Tony Hartman, Elkhart, and Bill (Missy) Hartman, Warsaw, survive as well.
Step-great-grandchildren, Julie and Sydney Hartman, and Trevor Delacruz, all of Warsaw, Angela Overmeyer, Atwood, and four step great-great grandchildren also survive, they are Mady, Abby, Sydney, and Alex Overmeyer all of Atwood.
Wade was preceded in death by his parents, his wives, Kay and Dee and two brothers: James and Conlee.
Friends will be welcomed by his family with the sharing of memories of Wade from 11 to 1 p.m. on Saturday, September 27, 2008, at the Johnson-Danielson Funeral Home, 1100 N. Michigan St., Plymouth.
Memorial service for Wade will follow the visitation at 1:00 p.m. The Rev. Dr. Dean Fager of the First United Methodist Church will officiate.
Military Honors will be presented to Wade by the Plymouth American Legion Post 27.
Memorial gifts in Wade’s memory may be made to the Plymouth Country Club Tree Fund.