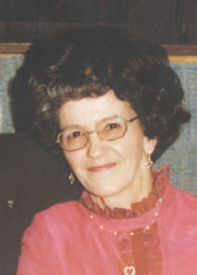 Wanda C. Balsley, 90, a former Lincolnway East resident, passed away at 8:05 p.m. on Thursday, June 12, 2014 at Pilgrim Manor, Plymouth.
Born on the family farm in Mill Creek, Indiana near LaPorte on July 10, 1923, Wanda was the daughter of Ora D. and Nora L. (Stanton) Spaid. Her family moved to Marshall County when she was 4 years old. Wanda graduated from Tyner High School with the class of 1941.
Wanda married Walter Wayne Wise on August 31, 1946 in Anderson, Indiana. He would precede her in death on January 1, 1974. A couple years later on July 25, 1976 in Grovertown, Indiana, Wanda married Howard E. Balsley. He would precede her in death on November 6, 1993.
Wanda worked on the production line at Easy Heat-Wire Craft for 27 years before her retirement in 1988.
She was a member of the Women of the Moose Auxiliary 1355 and the American Legion Ladies Auxiliary Post 27.
Wanda is survived by her brother, Dale (Margaret) Spaid of Walkerton. Her nieces and nephews are: Linda (Denny) Morrison of Culver, Debbie (Greg) Anthony of Osceola, Jeffrey Spaid of Sarasota, FL, Larry (Susan) Spaid of Philadelphia, PA, Michael (Sherri) Spaid of Hibard, IN and Jerry Shafer of Cassopolis, MI.
She was preceded in death by her parents, husbands, and brothers, Dallas and Devon Spaid.
In accordance with Wanda’s wishes, a family service only will take place and she will be laid to rest next to her husband Wayne in the New Oakhill Cemetery, Plymouth.
Memorial contributions can be made to the Humane Society of Marshall Co, PO Box 22, Plymouth, IN 46563.