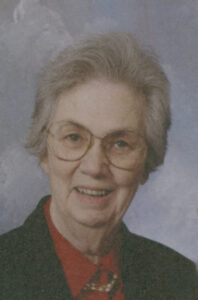 Wanda Lea Marsh, 80, a Culver resident for the past five years, coming from Centerville, Indiana, passed away at the Elkhart Hospice House at 10:10 p.m. on Monday, September 24, 2012 of natural causes.
Wanda is a native of Missouri, particularly the Yancy Mills area. She was born the daughter of Benjamin Frank and Mary Jane (Mihlfeld) Gabel in Rolla, Missouri on September 16, 1932. She was a graduate of Newburg High School in 1949 and attended classes at the University of Missouri – Columbia, where she also performed office work. Wanda had also worked in the office at Ft. Leonard Wood and then attained her Realtors License.
On December 16, 1950 in the Philadelphia Baptist Church in Phelps County, she became the bride of Gerald E. Marsh and soon became a homemaker.
She remained active, volunteering for her church the Southside Baptist, where she played the piano and taught Sunday school. Wanda also assisted at local nursing homes.
The couple had two children (and their families), son; Terry L. and his wife Carol Marsh and their children, Jaclyn (Kevin) Waddell and Sarah Marsh all of Cumming, Georgia, daughter; Melodie M. and her husband Kevin Overmyer and their daughter, Suzanne (Dan) Barth all of Culver, Indiana. Three great-grandchildren include: Ansley, Hannah and Grace.
Two sisters, Ruby (Cecil) King of Rolla and Roxie Tucker of Olathe, Kansas and two brothers, Les (Ann) Gabel of St. Louis and Ken Gabel of St. James, Missouri also survive.
One brother, Karl Gabel has preceded Wanda in death.
The family invites you to a luncheon at the Church of Christ in Licking at 11:00 a.m. prior to visitation. Visitation will be held on Saturday, September 29, 2012 from noon until 2 p.m. in the Fox Funeral Home, 128 S. Main St., Licking, Missouri. Services will immediately follow at 2 p.m. in the funeral home.
Burial will be in the Ozark Hills Memorial Gardens in Rolla, Missouri.
Preferred are memorial gifts to the Alzheimer’s and Dementia Services of Northern Ind., 922 E. Colfax Avenue, South Bend, IN 46617 or The Center for Hospice Care, 112 S. Center St., Plymouth, IN 46563