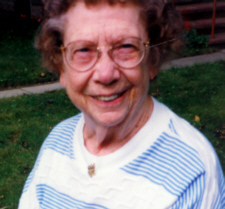 Wanda Shafer, 89, died at 4 pm .on Friday, May 8,
2009, in Miller’s Merry Manor, Plymouth, where she had been a resident for the past three years.
Wanda was born in Argos, on July 11, 1919. She was the daughter of James Hershel Irwin and Beulah Stevenson Irwin.
She first went to North School and then to Green Township Consolidated School.
She graduated from Argos High School in a class of 13 students where she was chosen ‘Miss Sunshine. Five years later, she enrolled and spent 2 ½ years at Marion College, Marion, IN.
In 1947, Wanda went to southern California to visit a cousin and met Marvin Lang
They married in 1948, at the Jordon Church where she had attended as a child.
In 1950, the couple moved to Pasadena, California, and lived there until 1966, when they moved back to Plymouth. Marvin died, after 20 years, in a job related accident. The blizzard of 1978 brought Dewey Shafer into her life. Dewey provided transportation into town for groceries and shoveled her walks. A romance was started and they married on January 2, 1979. Dewey died in 1996. Wanda worked a few years for the Pilot-News as a proof reader.
She enjoyed reading and writing poetry, mostly spiritual pieces.
She was a member of the Shiloh Wesleyan Church.
Wanda is survived by a stepdaughter, Glenna (Raymond) Borggren, Grovertown.
Special friends close to her were: Bonnie and Duane Stephenson and Edna Wagoner, Plymouth and Beverly and David Storm, Arizona.
She was preceded in death by her parents and two husbands: Marvin Lang and Dewey Shafer.
Friends are invited to share memories of Wanda with those close to her on Tuesday, May 12, 2009, in the Johnson-Danielson Funeral Home, 1100 N. Michigan St., Plymouth, from 10 to noon.
Funeral services in the funeral home will follow visitation at noon.
Burial will be in the Maple Grove Cemetery, Argos, IN.
Memorial gifts in Wanda’s name may be made to the Shiloh Wesleyan Church.