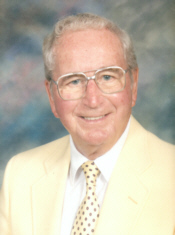 Ward A. Yoder, 85, died of natural causes at 1:02 p.m. at his residence, 225 Orchid Ct., Plymouth, on Wednesday, November 5, 2003. Ward had returned to Plymouth three years ago after having lived in Florida for approximately ten years.
He was born on October 22, 1918, in Nappanee, Ind., the son of Jesse and Mary Myers Yoder.
A 1936 graduate of Plymouth’s Lincoln High School, he attended Franklin College.
He served his country in World War II as a member of the United States Navy.
On June 3, 1939, in Plymouth, Ward and Wanda Reynolds were married. Wanda died on March 8, 1996, a few months before their 57th anniversary.
Ward worked for many years for Schlosser Brothers-Hawthorn Melody in Plymouth. He then worked in the Elkhart area in the mobile home business retiring in 1991 and moving to Florida.
He was an avid golfer and enjoyed reading. He was interested in politics and public affairs.
Ward’s most enjoyable past-time was being with his family.
He is survived by two daughters and their husbands: Linda and Max Schuh, Plymouth, and Sara and James Petersen, Franklin, Ind.
Also surviving are seven grandchildren: Doug Schuh of Shawnee, Kan.; Scott and Stephanie Schuh, Brad Schuh and Rodd Schuh, all of Plymouth; Matthew and Angela Petersen of Greenwood, Ind.; and Pamela and Brian Dillow and Erin and David Tilley, all of Franklin, Ind., along with seven great-grandchildren.
Ward was preceded in death by his parents, his wife, a sister, Mary Jane Emond and two brothers: Maynard and Newell W. Yoder.
Family services for Ward will be held. The Rev. William Kaster, pastor of the Trinity United Methodist Church, of which Ward was a member, will officiate.
Memorial gifts may be made to the Marshall County Hospice.