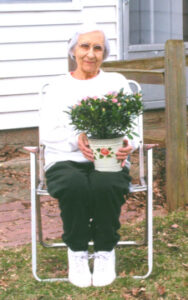 Wauneta M. Elliott, a lifetime Marshall County resident, died, following an illness, at her residence on Baker St., Plymouth, at 11:48 a.m. on Monday, February 19, 2007. She was 89 years old.
Wauneta was born on October 3, 1917, in Tippecanoe, Indiana, the daughter of J.D. and Nellie Maze Winterrowd. She attended schools in Tippecanoe, Linkville and LaPaz.
On January 6, 1940, in Argos, Indiana, she and Denzil D. Elliott were married. Denzil died on April 22, 1992.
Her life long pleasure was as a homemaker, taking care of her family.
She was an accomplished seamstress and enjoyed her flower gardens.
Wauneta was an active member of the First Presbyterian Church of Plymouth.
She is survived by a daughter, a son and their families.
Her daughter and son-in-law are Kay and Jose Gonzalez, Plymouth, and her son and his wife are Randall and Kay Elliott, Sault Ste Marie, Michigan.
Five grandchildren, five great-grandchildren and three great-great-grandchildren also survive.
Wauneta was preceded in death by her parents, her husband, and three brothers: Wayne, George and Robert “Max” Winterrowd. Three sisters have also died. They are: Alta Best, Elma Fanning and Delta Schrome.
Friends will be welcomed to celebrate the life of Wauneta by her family on Thursday, February 22, 2007, from 4 to 8 p.m. and on Friday, February 23, 2007, after 7:00 a.m., in the Johnson- Danielson Funeral Home, 1100 N. Michigan St., Plymouth.
Funeral services, conducted by the Rev. Paul Nye and the Rev. Dr. Ronald Liechty, pastors of the First Presbyterian Church, will be held in the funeral home at 10 a.m. on Friday, February 23, 2007.
Entombment will be in the New Oakhill Mausoleum, Plymouth, Indiana.
Memorial gifts in Wauneta’s memory may be made to the First Presbyterian Church.