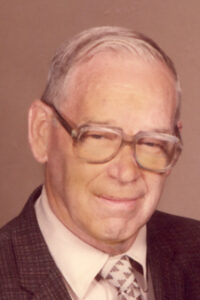 Wayne C. Brocksmith, 95, a lifetime resident of Plymouth, died in the Bremen Health Care Center on Sunday, January 31, 2010, at 3:05 a.m.
Wayne was born in Plymouth on March 31, 1914. He was the son of Alfred and Dora (South) Brocksmith.
He graduated from Plymouth High School with the class of 1932. In high school he played on the basketball team and continued playing after graduation on various industrial leagues. On April 7, 1939, Wayne and Helen Dillman were married in Delphi, IN. Helen died on May 7, 1995.
Wayne worked for Schlosser Brothers/Hawthorn Mellody for 44 years. He was plant manager for a number of years, retiring in 1976.
He loved to fish and watch sports on TV, especially the Chicago Cubs. He also enjoyed company of his brothers going to horse races in Chicago.
Wayne is survived by a daughter, Judy K. and son-in-law, Gary Shively of Bremen. He has two grandchildren, Kristi K. and Todd Hawkins of South Bend and Steve L. and Holli Shively of Bremen.
Six great grandchildren and many nieces and nephews survive as well.
He was preceded in death by his beloved wife, Helen, a sister, Anna Brocksmith, and four brothers; Bernard, Stanley, Henry and Herbert as well as one nephew; Bernie.
Friends are invited to share memories of Wayne with his family from 11:00 am until the time of services on Wednesday, February 3, 2010, in the Johnson-Danielson Funeral Home, 1100 N. Michigan St., Plymouth.
Masonic services by the Plymouth Masonic Lodge #149, of which Wayne was a 50 year member, will be held at 12:45 p.m., with funeral services, officiated by the Rev. Tom Padberg immediately following.
Memorial gifts in Wayne’s memory may be made to the Marshall County Cancer Society or the Center for Hospice and Palliative Care.
Entombment will be in New Oakhill Cemetery.