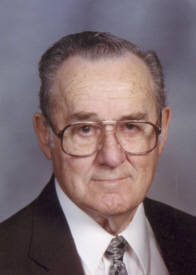 Wayne Ellison Ross, 88, a lifetime area farmer and resident of West First Rd. Walkerton, Ind., died of natural causes in the Pilgrim Manor Care Center, Plymouth, at 8:50 p.m. Friday, May 21, 2010.
He was born September 6, 1921, at home on the Walkerton family farm, the son of Chauncy and Mary Gertrude (Wood) Ross. Wayne was a graduate of Tyner High School.
On Christmas Eve, December 24, 1941, in the Donaldson home of his in-laws: Jesse and Ruth Burkholder, Wayne and Lucille were married. Together they raised five children on the family farm. Lucille would proceed in death on December 2, 2004.
In addition to farming, Wayne had worked at Studebaker and as a Union member Ironworker. Wayne was a longtime member of the Plymouth Wesleyan Church.
Surviving are three daughters, a son, daughter-in-law and 14 grandchildren and 12 great-grandchildren.
His daughters are; Marilyn Skiles, Bloomington, IN; Judi Macy, Ft. Myers, FL and Myra and Mike Farmer, Sweetser, IN. His son is; Vern and Lynn Ross, daughter-in-law, Jana Ross, all of Plymouth and a brother, Lowell Ross.
Wayne was preceded in death by his parents, his wife, a son, Jack Ross, a grandson, Jonathan Ross and three brothers, Paul, Worth, and John Ross.
The family will receive friends on Monday, May 24th from 5 – 8 p.m. in the Johnson-Danielson Funeral Home, 1100 N. Michigan St., Plymouth.
Funeral services will be held on Tuesday at 10:30 a.m. in the funeral home with the Rev. Scott Bills will officiate.
Burial will follow in New Oakhill Cemetery, Plymouth.
Memorials in Wayne’s memory may be made to the Alzheimer’s Association.