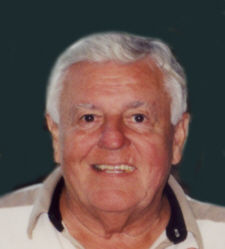 Wayne M. Frushour, 77, a Pretty Lake resident for 31 years, died of complications from an illness in Saint Joseph Regional Medical Center, Plymouth, on Wednesday, July 23, 2008.
A lifetime Plymouth resident, spending winters at Avon Park in Sebring, Fla. for the past 25 years, Wayne was born in Plymouth, on Sept. 9, 1930. He was the youngest of four children of Stuart E. and Virginia Thompson Frushour.
Always a hard worker, as a kid he worked at Harry Bechaka’s Candy Kitchen and then as a soda jerk in Ed Orahood’s People’s Drug Store.
Besides delivering the local newspaper for six years, he clerked and shined shoes in Don’s (Sporting Goods) Parlor throughout high school and college.
Wayne was the football, basketball and track manager for all four years at Lincoln High School. He graduated with the class of 1949.
It was in high school that Wayne became enamored with antique cars. His first automobile was a 1923 Model T. Always the astute businessman, he painted commercial signs –Merriman’s Grocery, Don’s Parlor, and George Davis’ Brake Service— on the sides, for a price. He also operated Fresh ‘”R’s” Auto Ads.
In an election year, Wayne was better than any bumper sticker with the Democrat candidates names on his car. He stayed loyal to the party and was the Marshall County Democratic chairman for eight years in the 1980’s.
The first thing he did when he got home from Fla. was to visit the eight warehouses were his “babies” were stored. Most of his vintage cars will be on display this year at the Blueberry Festival with many in the parade.
He always said that they were ‘road cars,’ not just for show. He rotated parking them, one at a time, in his driveway, so that “folks would get a chance to enjoy the vehicles of the past.”
Wayne went to Ball State University for a year before enlisting in the United States Air Force. As an Airman 1st class, he served in Japan from 1951 to 1953.
Returning to BSU, he was the manager of the football team for two years, graduating in 1956, with a degree in business.
He was first married to P. Diane Erwin. Together they had three sons: Greg, Mark and Matt.
On March 15, 1973 Wayne and Bonnie J. Hartman were married in Plymouth. They lived on two golf courses in Ind. and Fla., but Wayne wasn’t a player: Bonnie was. The couple were antique dealers for many years, owning BJ’s Antique Store on Lincolnway East. He became a connoisseur of glass and Oriental artifacts. He was also a stamp and coin collector. Bonnie died in April of 2005.
A lifetime member of the V.F.W., and the American Legion/Forty & Eight group, Wayne was a past commander and finance officer of the Legion Post 27. He served as past president of the Plymouth Rotary and the Plymouth Country Club. He was a member of the Chamber of Commerce and PIDCO. He had been president of the Plymouth Country subdivision and was a member of the Elks, the Eagles and Moose Lodge.
In Avon Park, Wayne stayed active with the Avon Park American Legion and VFW. He was president of Marshall County Days, traditionally held the third week of Feb., where about 200 present and former residents of the County got together to party.
Back home in the summer, he made frequent trips to Michigan to buy bushels of fresh fruit and vegetables for his neighbors.
Wayne was employed with the Gibson Insurance Agency for almost 40 years.
He is survived by his three sons and six grandchildren and a step-daughter. They are: Gregory A. (Mary) Frushour and their children, Jennifer and Gregory II of Grand Rapids, Mich.: Mark E. (Donna) Frushour, and their children, Anthony, Trevor and Thomas of Granite City, N.C.: Matthew S. (Lisa) Frushour and daughter Rachael of Owensboro, Ky. and a step-daughter, Cindi.
A sister, Dolphe Bublitz, Hobart, Ind., and an aunt, Mildred Thompson, also survive Wayne’s death.
He was preceded in death by his spouses, a sister, Betty McQuire, a brother; Stuart Frushour and a step-daughter Vickey.
The family will welcome Wayne’s friends on Saturday, July 26, 2008, from 9 to 11 a.m. at the Johnson-Danielson Funeral Home, 1100 N. Michigan St., Plymouth, Ind.
A memorial service for Wayne will begin at 11 a.m. with Military Honors by members of the Forty & Eight and American Legion Post 27 followed by the Rev. Dr. Ronald Liechty. Burial will be in New Oakhill Cemetery, Plymouth.
Preferred memorials in Wayne’s name may be made to the Plymouth Chapter of the American Red Cross.