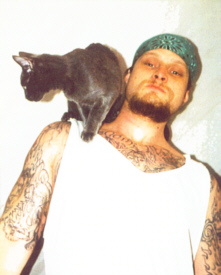 Whitey T. G. Culp, 32, a resident of Terre Haute, Indiana the past five years, passed away unexpectedly on Saturday morning, March 14th 2009. He was a former resident of South Bend and Mishawaka.
Whitey was born in Fulda (Hesson County) Germany on July 12, 1976 the son of Frederick L. & Christine E. (Smith) Culp.
Family was most important to Whitey and they knew him to have all the traits of a big bear. He was a carpenter in the building trades.
He is survived by his mother; Christine E. Culp of South Bend, a son; Whitey Frederick Dakota Culp of Valparaiso, three sisters; Carey A. (John P.) Weir of Plymouth, Denise A. Culp of Mishawaka and Ashley A. Culp of South Bend along with two nephews and a niece.
His father preceded him in death.
The family will receive friends from 5 to 7 p.m. on Wednesday, March 18th in the Johnson-Danielson Funeral Home, 1100 N. Michigan St., Plymouth where services will follow at 7 p.m. with Roberta Norris as the celebrant.
Memorial gifts may be made to the family.