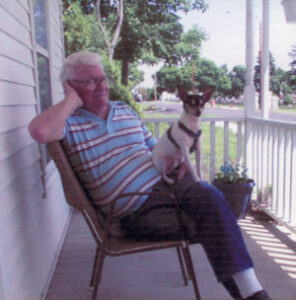 Willard F. “Bill” Snyder, 310 Oakhill Avenue, Plymouth, died at 12:40 p.m. Friday, April 30, 2010, in the Ironwood Health and Rehabilitation Center, South Bend, IN. He was 88 years old.
Bill was born on March 27, 1922, in South Bend. He was the son of Cecil D. and Hazel Marvin Snyder. He lived most of his lifetime in Marshall County.
He graduated from West High School with the class of 1941, and served his country honorably through W.W. II in the United States Army.
On July 12, 1947, in Plymouth, he and Ann L. Croy were married. Ann died on June 29, 1998.
Bill was an auto mechanic for Week’s Motors for 21 years. He retired in 1986.
Bill is survived by a son, Charles W. “Chuck” and a daughter-in-law, Sue Snyder of Plymouth.
Two grandchildren, Kris Snyder and Bill (Jona) Snyder, and two great-grandchildren, also survive together with a sister, Virginia Anderson of Mishawaka.
He was preceded in death by his parents, his wife and a sister Marjorie West He was a member of the V.F.W. post 1162 and the American Legion #27.
Private Graveside services will be held.
Memorial contributions in Bill’s name may be made to The Center for Hospice and Palliative Care, Inc.