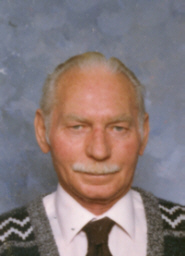 Willard F. Cole, Sr. 75, died at 4:50 a.m. on Saturday, August 26, 2006, in Miller’s Merry Manor, Plymouth, IN. He had been a resident of Bourbon, IN, for 40 years, having come from Coleman, MI.
The son of James A. and Blanche A. Tripp Cole, Sr., Willard was born on July 10, 1931, in Big Bay, MI. He attended school in Coleman, MI., and served in the U.S. Air Force during the Korean Conflict.
On Dec. 9, 1954, Willard and Grace Allen were married in Manistique, MI,
Willard had worked in various factories. A family man, he enjoyed spending time with his family. When he was younger, he enjoyed hunting and fishing.
Willard is survived by Grace, his wife of 51 years, a daughter: Gretta G. Anderson of Bourbon, two sons: Willard F. and Kim Cole, Jr. Of Whitehall, MI and Kim L. and Beverly Cole of Argos, IN, and a daughter-in-law: Pamela Cole of Plymouth, IN.
Also surviving are 15 grandchildren and 11 great-grandchildren, two brothers: Don Cole of Lakeview, MI and David Cole of Coleman, MI, and two sisters: Margaret Govitz and Roseanne Brackett, both of Coleman, MI.
Willard was preceded in death by his parents, a son: Timothy Cole, two brothers, Richard Cole and James A. Cole, Jr., and a sister: Shirley Wesley.
A Remembrance Service for Willard will be held on Saturday, September 9, 2006, from 11:00 a.m. to 2:00 p.m. at the Bourbon Garden Court Community Room, Bourbon, IN.
Johnson-Danielson Funeral Home, Plymouth, IN, is in charge of the arrangements.
Memorial gifts may be made to the Bourbon American Legion Post 424.