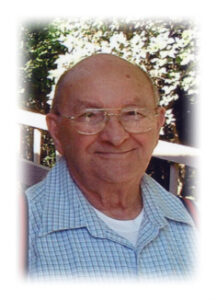 Willard George “Will” Messman, 80, a Plymouth resident since 1993, formerly of Walkerton, IN. died unexpectedly at 11:02 a.m. of natural causes at his Lincoln Highway residence on Tuesday, March 20, 2012.
Will was born in LaPorte, IN. on November 17, 1931. He attended the Lutheran School in LaPorte and served in the United States Army in the Korean War.
On January 25, 1997, in Walkerton, Will and Martha I. (Pointon) Bunton were married.
Will was a jack of all trades. He worked in the R.V. manufacturing business in Missouri in the plumbing department. He also had cooked in Walkerton at the BP Convenience Store.
He loved his dog, Bair a chiwawa. He enjoyed traveling, fishing and doing yard work. As a cook, he was known for his delicious Reuben and Italian Beef sandwiches and egg rolls.
He was a long time member of the Blissville Church of the Brethren.
Will is survived by his wife, Martha and by two sons: Herbert and his wife, Glenda Messman, Decatur, AL. and Robert and his wife, Nancy Messman, Texas.
Seven step-daughters also survive. They are: Cheryl Carder, Michigan City, IN.; Laura Arvin, Ellen (Earl) Scott, Margaret (Greg) Carroll and Rose Cook, all of Plymouth, and Sherry (Kenneth) Lindsley, New Buffalo, MI., and Donna Cannon, Nappanee, IN.
Six step-sons survive as well. They are David (Diane) Pointon; Douglas (Glenna) Bunton; Michael (Marlene) Bunton: Donald (Tina) Bunton, all of Plymouth and Warren (Carolyn) Bunton, Grovertown and Ronald (Cara) Bunton, Bremen.
Four sisters also survive. They are Virginia Budd, Phoenix, AZ.; Delores (Dennis) Hickman, Jonesboro, AR.; Dorothy Smith, LaPorte, IN. and Marilyn Messman. One brother, Edward Messman of Florida survives as well. Former spouses include: Jean Messman, Wilma Messman and Wanda Messman.
Will was preceded in death by his parents and by one brother, Clarence Messman.
Visitation for will be held from 2 to 5 p.m. (EDT) on Sunday, March 25, 2012, in the Johnson-Danielson Funeral Home, 1100 North Michigan St., Plymouth.
Funeral services for Will, officiated by Rev. Dester Cummins, pastor of the Blissville Church of the Brethren, will be held in the church, 6250 Spruce Trail, Plymouth at 11 a.m. (EDT) on Monday, March 26, 2012. Calling will continue one hour prior to the service in the church. Interment with military honors provided by members of the Walkerton American Legion Post 189, will be in the Woodlawn Cemetery, Walkerton, IN.
Memorial gifts may be made in Will’s memory to the Blissville Church.