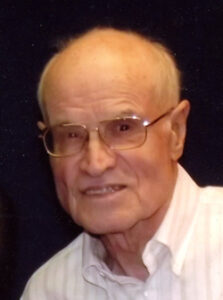 Willard G. Pletcher, 93, of Argos, passed away Thursday, July 6, 2017 in his residence.
Willard was born on March 8, 1924 in Nappanee, Indiana, to the late Nathan and Cleo (Beam) Pletcher.
He graduated from Argos High School in 1942. He then went on to serve our country in the United States Coast Guard. He was honorably discharged in 1946.
On May 16, 1948 in Plymouth, he married Ruth T. Thomas; she preceded him in death on January 14, 2016.
He had worked at Studebaker, Oliver Farm Equipment, Ben Hill Griffin for eight years, Thermogas for sixteen and a half years, and Co-op Elevator for four and a half years. Willard attended Southside Church of God, South Bend. For the last eight years he has been attending Crossroads Evangelical Free Church. He was a member of the Michiana Bee Keepers Association and the American Legion in Argos. He also enjoyed reading, gardening, farming, feeding and watching the birds as well as bee keeping; of which he started in 1975. Surviving are his three children; Rebecca S. and David Hartman of Plymouth, Stephen W. and Penny Pletcher Sr. of Culver, Timothy J. and Tisha Pletcher of Plymouth. Also surviving are his ten grandchildren; Elizabeth and Gabriel Campbell, Rachel Hartman, Stephen Jr. and Katie Pletcher, Cassandra Pletcher, Trenton, Tucker, Trevor, Thad, Trey, and Teagan Pletcher, two great-grandchildren; Isaiah and Wyatt Pletcher. He was preceded in death by his parents, wife, daughter; Kathleen E. Pletcher, six brothers and two sisters.
The family will receive friends from 4-8 PM on Monday, July 10, 2017 in the Johnson-Danielson Funeral Home, 1100 North Michigan Street, Plymouth, and from 10:00 AM until time of service on Tuesday.
Funeral services will be held at 11:00 AM on Tuesday, July 11, 2017 in the funeral home with Pastor Scott Yoder and Pastor Greg Crump officiating.
Burial will follow in the Oak Hill Cemetery with Military Honors provided by members of the American Legion Post 27, Veterans of Foreign War- Marshall County Post 1162 and Disabled American Veteran Chapter 42.
In lieu of flowers memorial contributions may be directed to either the Gideons International, P.O. Box 140800 Nashville, Tennessee 37214 or to the World Missionary Press, 19168 County Road New Paris, Indiana 46553.