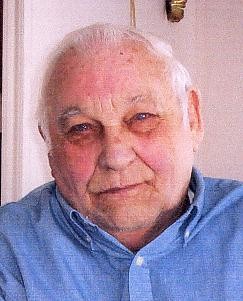 Willard Jay “Bill” Jaarda, 80, passed away on Saturday, September 27, 2008 of natural causes in the emergency room at St. Joseph Regional Medical Center, Plymouth. Bill has resided on 4th Road in Plymouth since 1972 coming from North Liberty, Ind.
Bill was born the son of William John and Anna (Bounce) Jaarda on January 19th, 1928 in Holland, Michigan. He attended Holland schools and was raised in the Dutch Christian Reformed Church.
He served his country during the Korean Conflict stationed in Okinawa a member of the U.S. Army – 29th Infantry Regiment. He was honorably discharged on August 22nd, 1953.
On July 3rd, 1954 in North Liberty, he took as his bride the former MaryBeth Granning who survives. Together they enjoyed retirement winters in McAllen, Texas.
Bill was a faithful Torrington Corp. employee for 31 years. He was the last master inspector to leave the plant at its closing in 1984.
He was a master of many things… to his family he was an advisor with vast knowledge of various subjects, he was a carpenter with the eye of a perfectionist for quality. Over the years he has acquired many many airway friends as an operator of Citizen Band radios since 1973 known as “Wild Bill”. Or you may have just found Bill puttering in the garage.
Also surviving is a son and family; Brian J. (Nelda) Jaarda of South Bend, Ind. and children; Michael B. (Amber) Jaarda of Osceola, Ind and Nicole (Robert) Wright of Mishawaka. Together they have given Bill six great-grandchildren: Bethani, Samantha, Christopher, Caleb, Clarke and Collins.
A sister, Lorriane Palmer of Holland survives with many nieces and nephews.
He was preceded in death by a sister Sara Brower.
Friends are invited to visit with the family on Tuesday, September 30th from 5 – 8 p.m. in the Johnson-Danielson Funeral Home, 1100 N. Michigan St. Plymouth and after 7 a.m. Wednesday, October 1st until time of services at 1 p.m. in the funeral home. The Rev. Paul Rowe of the Apostolic Temple in South Bend will officiate.
Burial will follow in the Memorial Garden of New Oakhill Cemetery, Plymouth.
Memorial gifts may be made to the charity of the donor’s choice.