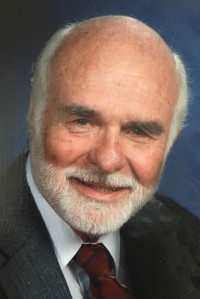 Former Mayor, William â€œBillâ€ A. Satorius, 81, passed away on Wednesday morning, July 24, 2019 at Pilgrim Manor Nursing Home in Plymouth, from complications of A.L.S. (Lou Gerigs Disease).
Bill was born on April 21, 1938 in Milwaukee, Wisconsin to Carl N. and Lydia M. (Bischke) Satorius. He graduated from Milwaukee Lutheran High School and attended the University of Wisconsin in Milwaukee.
Bill served his country in the United States Marine Corps. After his service, he met and married Sharon Seehafer in Marshfield, Wisconsin in 1965.
A job transfer would move the couple to Rochester, Indiana in 1965. And in a second opportunity the couple would make Plymouth, Indiana their forever home in 1970, when Bill began working at Del Monte Foods. He would retire in 2000 with 30 years of service.
Bill loved his community and enjoyed using his leadership skills to help better the City of Plymouth and Marshall County. Bill served as a volunteer on the Plymouth Fire Department for 13 years. He served on the City Plan Commission for 13 years. He served on the Board of Public Works and Safety, and was a member of the Marshall County Solid Waste Advisory Board for 20 years.
He ran for City Councilman twice and was elected to the Office of City Councilman in 1983. After serving on the council, Bill was elected Mayor of the City of Plymouth in 1987. His leadership and respect earned from his other civic leaders and the residents who called him â€œfriendâ€, led Bill to receive a Key to the City of Plymouth on his 79th birthday in 2017.
A man of deep faith, Bill was a member of Calvary Lutheran Church for over 45 years; serving as Chairman, Vice Chairman, on the Board of Elders and as the Trustee. He also served as Chairman of the Calvary Lutheran Preschool Committee for 12 years.
Bill had a love of flying and attained his commercial pilot license. He served on the Plymouth Aviation Commission for 4 years. He was also a lifetime member of the V.F.W. Post 1162 in Plymouth. Bill enjoyed woodworking & refinishing furniture in his retirement. He enjoyed golfing, especially with his good buddy, Earl Buchert.
He is survived by his two children: Kari D. Satorius and Douglas A. (Melinda) Satorius of Plymouth; grandchildren: Anna M. Satorius, Nicole R. Satorius and Nicholas A. Satorius; siblings: Carl (Shirley) Satorius, Margaret (Gene) Feld, Barbara Fuller and Elizabeth Tuma and many nieces and nephews. Also dear friends, Judy and Jerne Minzlaff and Vic and Darlene Rose.
Bill was preceded in death by his wife of 50 years, Sharon, in 2017, his parents and his in-laws.
Visitation will be held on Thursday, August 1, 2019 from 4-7 p.m. in the Johnson-Danielson Funeral Home, 1100 N. Michigan Street, Plymouth.
Funeral services will be held at 11 a.m. on Friday, August 2, 2019 at Calvary Lutheran Church 1314 N. Michigan Street, Plymouth, with Rev. Eric Ahlemeyer officiating. Visitation will resume one hour prior to the service in the church. Military Honors will be provided by members of the American Legion Post 27, Veterans of Foreign War- Marshall County Post 1162 and Disabled American Veteran Chapter 42 following the funeral.
Sharon and Bill will be laid to rest at a later date in the New Oak Hill Cemetery, Plymouth.
Memorial contributions can be made to Calvary Lutheran Preschool, 1314 N. Michigan Street, Plymouth, IN 46563.