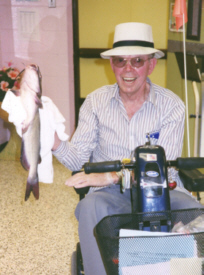 William “Bruce” Burch, a former Plymouth resident, living since 1997 in the Indiana Veterans Home, in Lafayette, Ind., died of natural causes at 8:50 a.m. on Monday, January 16, 2006. Bruce was 72 years old.
Born in Lone Wolf, Oklahoma, on October 6, 1933, Bruce was the son of Oscar and Floy Winifred Ward Burch.
He graduated from Oklahoma City schools and joined the United States Army, serving his country in the Korean Conflict as an E4 Specialist.
Until he began to suffer ill health, Bruce was a commercial real estate salesman in Colorado. His first stroke was on January 9, 1986 and his second followed ten years later.
He never gave up his resolve to live a full and productive life.
He had a sparkling smile, an easy going yet competitive nature and was always very helpful to everyone he knew.
He loved to fish and play the steel guitar. Country music was his forte. He maintained his own vegetable garden spot at the VA Home and was a huge NFL Indianapolis Colts fan.
Bruce is survived by his three daughters and seven grandchildren. They are: Brenda K. Burch and children Charlie, Jessica and Sarah of Ft. Collins, Colorado; Stephanie A. and Tim Mitchell and their children, Taylor, Briana, of Parker, Colorado and Julie L. Burch and her children, Timothy and Kody, of Plymouth.
Two brothers and a sister survive Bruce’s death. They are: James and Martin Burch and Glenda Burch, all of Oklahoma City, Oklahoma.
Numerous nieces and nephews survive as well.
Bruce was preceded in death by his parents, four brothers and three sisters.
Services will take place in Lone Wolf, Oklahoma.
The Johnson-Danielson Funeral Home, 1100 N. Michigan St., Plymouth, is assisting the family with arrangements. Burial will be in the family’s plot in the Retrop Cemetery in Lone Wolf.
Memorial gifts in Bruce’s memory may be made to the Indiana Veterans Home, 3851 N. River Road, Lafayette, Indiana, 47906