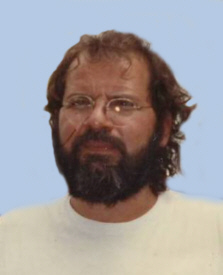 William “Billy” Long, also known as “Longer”, went to his forever home with Jesus on Monday, July 22, 2013.
The son of Carl Long and Norma Long LeCount, Billy was born on December 10, 1951 in Elkhart. Billy was known for his generous heart and on several occasions, he was known to buy shoes and bikes for the neighbor kids. He also loved a good juicy peach. His interests included a love for Harleys, woodworking in his garage, golfing, working on his old cars and helping people in their time of need, rather it be listening or having to buy groceries. He saw things in black and white and was known to have no filter on his mouth. He was the gruffest of men with the tenderist heart.
He had worked at Shamrock Homes doing maintenance and as an electrician, retiring after 25 years of service.
In 1977, he and Rita K. Howard began a life together and he took on the role of being father to her three young children….he provided a beautiful life for them. Billy and Rita were married on April 13, 1993 in Syracuse.
Rita survives along with her children: Robert S. (Marie) Pesak and their children, Alexandria and Noah, all of Plymouth; Adam Pesak and his daughter, Daisy , both of Ashland, Oregon and Angela L. (Richard) Lokun and their children Bella, Nicholai and Lilly, all of Plymouth.
Also surviving are his mother, Norma LeCount of Wabash, IN; a brother, Art Davy of Michigan; three sisters: Cathy Albert of Middlebury, IN, Sandy Parks of Salem, OR and Janet Jones of Washington and a very special person whom he loved dearly, Jimmy Montague. Billy was preceded in death by his father, Carl and his Grandma Long.
Per Billy’s request, there will be no services.
Johnson-Danielson Funeral Home, Plymouth, is assisting Billy’s family with the arrangements.
Memorial contributions may be made to the A.S.P.C.A. or the Marshall County Humane Society, P.O. Box 22, Plymouth, IN 46563.
Notes of condolence may be sent to the family through the web-site: www.johnson-danielson.com