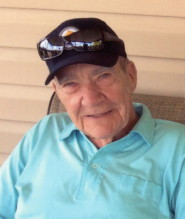 William D. “Bill” Bickerstaff, 88, passed away on 8:33 a.m. on Wednesday, November 7, 2018 at the St. Joseph Regional Medical Center, Plymouth. Bill was born in Steubenville, Ohio on September 18, 1930 to Albert and Augusta (Oberg) Bickerstaff.
As soon as he was old enough, Bill enlisted into the U.S. Navy and served until his Honorable Discharge.
On August 5, 1947, Bill married Dorothy C. Gooch in Toronto, Ohio. The couple shared many memories in their 49 years of marriage, until her death in 1996. After some time, Bill would marry the second love of his life, Alberta â€œPetieâ€ Bowman, on July 20, 2007, until her passing on March 18, 2014.
Bill worked for Ohio Power and for AEP as an engineer for 37 years until his retirement in October of 1990.
He loved his family and adored all his grandchildren, all three generations. He was a member of the Plymouth Moose Lodge, serving in various positions through his years. He was a member of the American Legion in Tell City, IN, a lifetime member of the VFW Post in Moundsville, WV and he attended First United Methodist Church. Bill was an avid Pittsburg Steelers fan and the Pittsburg Pirates. He was very proud and boasted that he attended game seven of the 1960 World Series when Bill Mazoreski hit the winning home run.
Bill is survived by his children and their families: Debbie Hesler (David Roush) of Plymouth and her children: Jamie, Mark and Mike, (deceased) Doug (Geneva) Bickerstaff and his children: Kristie, Kelly and Kisha, Dan (Cindy) Bickerstaff of Huntington, IN and their children: Danny, Billy, Ty, Jim and Curtis, and John (Gloria) Bickerstaff of Three Oaks, MI and their children: Lori and Sean; 33 great-grandchildren and 6 great-great-grandchildren; and his brother, Albert â€œAbieâ€ Bickerstaff of Steubenville, OH.
He was preceded in death by his two wives, Dorothy and Alberta â€œPetieâ€, his parents, son Doug Bickerstaff and his siblings: Clarie Louise Bainso, Mary Margaret Stoehr and Dale Bickerstaff.
Bill decided to donate his body to the IU School of Medicine, so there will be no funeral arrangements set at this time.
Memorial contributions can be made to the First United Methodist Church, 400 N. Michigan Street, Plymouth, IN 46563.