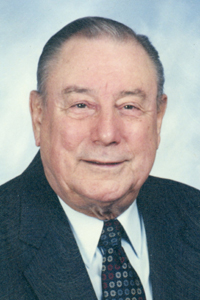 William D. Spencer, 94, surrounded by family, went to be with the Lord on Thursday, May 31, 2018 at Greenleaf Health Campus in Elkhart. He was a longtime Plymouth resident.
The son of Roy Frederick and Lois Wildia (Cochran) Spencer Bloome, Bill was born on October 8, 1923 in Kansas City, Kansas. He graduated from Carlinville High School in Carlinville, Illinois and attended Cornell University-Officer Candidate School.
Bill served our country in the U.S. Army until the end of WWII, when he received his Honorable Discharge.
On February 15, 1948 in Carlinville, Illinois, Bill married his true love, Norma Jean Chapin. To this union came six children: William D. Jr., Charles, Richard, Beth, Sue and Mary. Norma preceded him in death on June 12, 2013.
He worked as a district representative in starting up Standard Oil stations in Plymouth and the surrounding areas. In June of 1971, Bill and Norma founded NoBi Corp., now doing business as NoBi Security & Fire. He was the â€œBiâ€ in NoBi.
Bill was an avid hunter, fisherman, archer, conservationist and a licensed private pilot. After retirement, he managed the family farm and was active in all aspects of the Standard Bred horse racing industry. He also raised and bred bird dogs. Bill loved dancing and spending time with his grandchildren.
He was past President of Quail Unlimited, a member of Ducks Unlimited, the National Rifle Association, NJY Flying Club and the Plymouth Gun Club. Norma and he were members of Immanuel Lutheran Church in Donaldson, IN.
He is survived by his children: Charles H. (Judy) Spencer of Bristol, Richard F. (Sandra) Spencer of Elkhart, Beth A. (Jeffrey) Siderius of Wheaton, IL, , and Mary L. (Damian) Mizera of Maryville, MO; 18 grandchildren, 21 great-grandchildren, 2 step-great grandchildren and a soon-to-be great-great granddaughter; brother, Donald (Helen) Spencer of Jerseyville, IL and sister-in-law, Winifred Wild. Bill was preceded in death by his wife Norma, parents, daughter Sue and son William D. Spencer Jr., and siblings, Phyllis Lee and Prentiss Wild.
Visitation will be held on Saturday June 9,, 2018 from 11-1 p.m. in the Johnson-Danielson Funeral Home, 1100 N. Michigan Street, Plymouth. Funeral services will follow in the funeral home at 1 p.m. with Rev. Ted Stanley officiating.
Burial will be with his wife, Norma, in the New Oak Hill Cemetery.