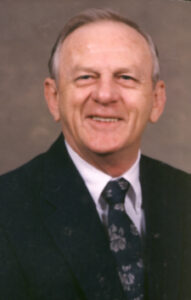 William “Don” Carter, 79, of 2320 Hillcrest, Plymouth, died of natural causes at 5:10 p.m. on Sunday, October 14, 2007, in Miller’s Merry Manor, Plymouth. Born in Fairview, Tenn. on August 3, 1928, Don was the son of Jesse and Susie Chester Carter.
On Oct. 3, 1952, Don and Marilyn Jo Sanders were married.
An experienced electrician, he plied his trade for 35 years at Youngstown Sheet and Tool Company retiring in 1984.
He was a member of the Plymouth Wesleyan Church for 12 years. He ushered at services and was honored to carry the American flag into the new building.
Don is survived by his wife, Marilyn Jo, and two sons Bradley (Michelle) Carter, Argos, Indiana and Jeffery Carter of Fort Wayne, Indiana
A brother, Hurbert (JoAnn) Carter, Hendersonville, Tennessee and a sister, Elnor Barnhill, Birmingham, Alabama also survive him.
Don is survived by seven wonderful grandchildren.
He was preceded in death by his parents and a sister, Mildred Kalsey.
Friends are invited to share memories and celebrate Don’s life with them from 10:00 to 11:00 am on Thursday October 18, 2007 in the Johnson-Danielson Funeral Home, 1100 N. Michigan St., Plymouth.
Funeral services for Don will be on Thursday, October 18, 2007 at 11:00 am in the Johnson-Danielson Funeral Home. The Rev. John Branch, pastor of Plymouth Wesleyan Church will officiate.
Memorial gifts in Don’s memory may be sent to his church