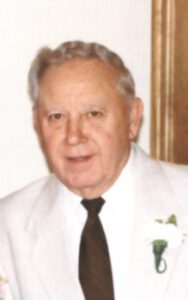 William E. Brown, 220 Klinger Ave., died of natural causes in Plymouth’s Miller’s Merry Manor, at 7:33 p.m. on Thursday, June 11, 2009. He was 88 years old.
Bill was born on November 6, 1920, in Winslow, IN., the son of James and Lillie Mae (Noland) Brown. He graduated from Bicknell Indiana High School with the Class of 1940.
He attended Purdue University for two years and graduated with a B.S. from Indiana State, followed by at Master’s degree from Ball State University.
As a teacher and a coach for nearly 40 years, his students now adults still greeted him as “Mr. Brown”. He was a familiar face at many schools including: Tyner, West Township, North Webster and LaPaz. After 26 years, he retired from the Union-North United School Corporation in 1984.
On May 14th, 1948 he married the former Betty Faye Matz who passed away on December 11, 1989. On September 4th, 1993 in Plymouth he married Elizabeth “Betty” Peterson Brown who survives.
He was a member of the First United Methodist Church at North Liberty, IN and a former member of the Indiana State Teachers Association. Bill enjoyed all sports especially Notre Dame and making the deal for a new car so he and Betty could ‘up and go’ as they traveled the United States.
Bill is survived by his wife, Betty, Plymouth, and by a son, Gerry E. (Deborah) Brown, North Liberty, IN and Dale R. (Laurel) Peterson, a step-son of Rensselaer, IN., and Diane Peterson, a step daughter of South Bend.
A grandson, Jameson M. Brown, a granddaughter, Kirsten E. Brown, both of North Liberty also survive, together with grandson, Todd R. (Julie) Peterson, Remington, IN., survives as well, together with their children, Ashley Elaine Peterson and Blake Peterson, both of Remington, IN and grandson, Patrick J. (Kim) Hoehne and their children Nicole L. Hoehne and Camryn P. Hoehne all of Carmel, IN. He was preceded in death by his parents, his first wife, a brother, Jack Keasling and a grandson, Jeremy T. Hoehne.
Friends are invited to visit with the family at the Johnson-Danielson Funeral Home, 1100 N. Michigan St., Plymouth, on Monday, June 15th from 4 – 8 p.m. and one hour prior to services on Tuesday
Funeral services will be held at 1 p.m. Tuesday, June 16th in the funeral home. Pastor Fred Stayton of the Bristol United Methodist Church will preside. Burial will follow in the Morris Cemetery, LaPaz.
Memorial gifts may be given to the Alzheimer’s Association, 922 E. Colfax Avenue, South Bend, Indiana 46617 or to the Donor’s Choice.