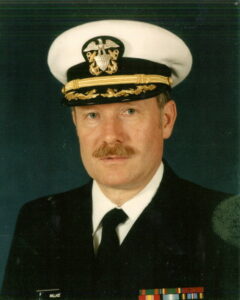 William E. Wallace, 82, passed away on Friday, January 7, 2022 at Brentwood of LaPorte Senior Living. Born on July 22, 1939 in Landenburg, Pennsylvania he was the son of William and Elizabeth (Smith) Wallace.

After graduating from high school in 1957 William enlisted in the U.S. Navy on March 28, 1958 proudly serving his country for 36 years as a Commander in the Medical Service Corps as a Comptroller where he oversaw the Mid-West Region Military Hospitals. While serving he met the love of his life Jane Schneider and they were married. He attended Auburn University for his undergraduate degree, George Washington University receiving his Master’s degree in finance and attended post graduate school in Monterey, CA. After retiring from the military in 1994 he moved to Plymouth, IN in 2000.

His children will always remember him as a person with a heart of gold who was very generous, if there were 10 pies, he would have his hands in 11 of them. William often helped the elderly with their taxes, spent time with Lions International in South America generously giving out glasses to children.

William enjoyed playing golf, watching and playing baseball and a big runner who often ran in the Blueberry Stomp yearly. He was a past District Governor of the Lions Club and recently received a chevron for 35 years of service.

He was a devout Catholic that belonged to St. Michael’s Catholic Church for 17 years.

He was a member of the Knights of Columbus, Veterans of Foreign Wars, American Legion, Care and Share, SHIIP and Lions International.

He is survived by his wife Jane of LaPorte; children: William (Shawnee) Wallace of Canton, GA; Stephanie (Tim) Ward of Bremen; Julia Kovachek of Grayslake, ILL; 7 grandchildren and 5 great-grandchildren.

Mass of Christian Burial will be held on Saturday, January 15, 2022 at 11 am at St. Michael Church, 611 N. Walnut Street, Plymouth with Fr. Spenser St. Louis officiating.

Burial will take place in the St. Michael’s Cemetery, Plymouth.