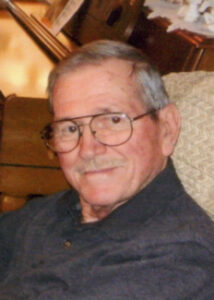 William E. “Bill” Wright, 78, a resident of 14B Road, Plymouth, passed away at his home on Wednesday, April 11, 2012, following an illness.
Bill was born in Plymouth, on December 17, 1933, the son of Edgar Dale and Edna Grace (Miller) Wright.
He graduated from Plymouth High School with the class of 1951 and served with the 38th Missile Battalion in the United States Army.
He lived in Marshall County for his entire lifetime except for 2 ½ years in Virginia.
On June 2, 1955, he took as his bride, Darlene Daugherty, in Plymouth. Together they have shared over 57 years of wonderful memories.
Bill worked at AM General from 1966 to 1990, as a Millwright. After retiring he worked part-time for Quadrelle Realty in the same building.
He was a long and loyal member of the Pretty Lake Trinity United Methodist Church.
He was an active outdoorsman, who loved to hunt deer and turkey, sharing those moments with family. Bill took his last deer on November 22nd 2011. He enjoyed ice fishing and fishing for Canadian Walleye.
Very crafty and artistic, he enjoyed working with flat metal fabricating life size silhouettes of animals that spot the landscape of the family home. He and Darlene were members of the Eagles and Moose Family Center in Plymouth where they loved to dance. Bill is survived by his loving wife, Darlene and their children: David Alan (Jackie) Wright of Plymouth and their family: Garrett & Susan with son Levi, Joe with daughter Jane and Mitchell. Sherri Lynn (Dick) Martin of Plymouth and their children: Chad and Jessica. Steven Shawn (Martha) Wright of Plymouth and their family: Nikki with son Isaiah, William with son Lenyx and Gabbi. Susan Dawn (James) Keefe of Plymouth with their family: Spring & Leif Benson with sons; Keegan and Juda, Linsey & Cory Roberts with son Blake and daughters; Nena and Jocelyn and Sarah and her fiancé Brian Robinson.
Three sisters, a brother and sister-in-law also survive.
The sisters are: Hilda G. Green, Southhampton, N.J., Phyllis Jean Abair, Patsy J. Groninger, brother Larry W. (Phyllis) Wright, and sister-in-law, Eileen Wright, all of Plymouth. Numerous nieces and nephews also survive.
Bill was preceded in death by a sisters, Audrey Rush and Edna P. McCan brothers: Roger Dale Wright, Eddie D. Wright and an infant Jimmy Alan Wright.
Visitation will be held on Friday, April 13, 2012, from 3 to 8 p.m. in the Johnson-Danielson Funeral Home, 1100 N. Michigan St. Plymouth. Services for Bill will be held on Saturday, April 14, 2012, at 11 a.m. in the Pretty Lake Trinity United Methodist church, 8985 SR 17, Plymouth, with Pastor Tamara Boggs officiating. Calling will continue at the church one hour prior to services.
Burial will follow in the Burr Oak Cemetery, Burr Oak, with full Military Honors.
Preferred memorial gifts in Bill’s memory may be made to the Pretty Lake Church or to the Hospice and Palliative Care Center, 112 S. Center St., Plymouth, IN 46563.