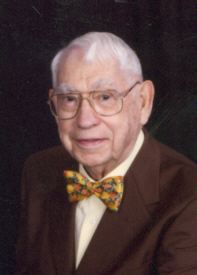 William Franklin Laramore died June 15, 2011 in his Ferndale Avenue home, Plymouth of myeloma. He was born July 6, 1920 in South Bend to Herbert K. and Muriel Bosworth Laramore. He lived in Knox until age 14, when his family moved to Plymouth where his parents helped with the management of F.W. Bosworth Co., Inc., the retail store his maternal grandfather, F.W. Bosworth, started in 1891.
He graduated in 1938 from Plymouth High School and in 1942 from DePauw University, where he was elected to Sigma Delta Chi journalism honorary. He worked in South Bend at Robertson’s department store and Studebaker Corp. In 1945 he became manager of the floor covering department at Bosworth’s store, and he was noted for his creativity in producing award-winning advertising for the Plymouth Pilot-News. He retired from the store as president and manager in 1982.
In 1963 Bill was appointed to the Plymouth Public Library Board, beginning many years of devoted service to Indiana’s libraries. He served 15 years on the local board and 12 years on the Indiana Library and Historical Board, which manages the State Library and Historical Bureau. He was president of each of these boards and of the Indiana Library Trustees Association and Friends of Indiana Libraries, the only person to be president of all three of these state groups. In 1979 he was named Indiana’s Outstanding Library Trustee. As Plymouth library board president, Bill was a leader of the effort to find funding for the new library building when it was built in the late 1970s. The public meeting room in the expanded Plymouth library was named in his honor. For many years he organized the local Friends of the Library book sale, and he was the first recipient of the Plymouth Friends of the Library award.
Bill served as president of the Plymouth Chamber of Commerce, Community Fund (now United Way), Friends of Ancilla College and DePauw Area Alumni. He was a Plymouth city councilman, Republican precinct committeeman for 15 years, director and secretary of Plymouth Industrial Development Co., board member of State Exchange Bank, Kiwanis Club, and Marshall County Historical Society, and co-chaired the Plymouth Area Bicentennial Commission. An active member of First United Methodist Church, he served as a Sunday School teacher for more than 25 years, District Lay Leader, and on many church committees. He worked with 4-H clubs, Cub Scouts and Camp Fire.
On June 25, 1950 he married Betty Lou Pinney in South Bend. In 1972, with his wife, he received the Plymouth Jaycees Distinguished Citizen Award, in 1983 the Ancilla College Distinguished Service Award, in 2003 the Community Spirit award given by Saint Joseph Regional Medical Center Plymouth, and in 2005 the Plymouth Area Chamber of Commerce Distinguished Citizens Award. He was honored by Gov. Joseph E. Kernan as a Sagamore of the Wabash in 2004.
Survivors include his wife Betty Lou of Plymouth and son Jon (Janet McCabe), daughter Ann Johns (Randolph), grandchildren Alice and Peter Laramore and Daniel Sheehan, all of Indianapolis. Other survivors include sister Jean Schricker and nephew George Schricker Jr. (Michele) of Plymouth, niece Sara Klein (Jonathan) of Park City, UT and great nephews Benjamin and Avram (Carol) Klein and Ezra Schricker.
Calling will be at Johnson-Danielson Funeral Home 1100 N.Michigan St., Plymouth on Sat. June 18 from 3 to 6 p.m. A memorial service will be held at First United Methodist Church in Plymouth on Mon. June 20 at 11 a.m. with calling one hour prior to service.
Memorial gifts may be made to Plymouth Public Library, 201 N. Center St. or to First United Methodist Church Memorial Fund, 400 N. Michigan St., Plymouth, IN 46563