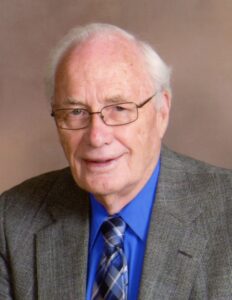 He was born March 9, 1935 in Chicago, Illinois to Heinrick and Lucy (Muhlena) Blacquiere (name later changed to Blake).

He was a graduate of Chesterton High School where he excelled in basketball, track, and cross country.
He and Nina Johnson were married on December 7, 1957 in Augsburg Lutheran Church, Porter, IN just prior to his being inducted into the Army serving from 1958-1960. Nina was able to join him during his year in Germany where they had the wonderful opportunity to visit his many relatives there.

Upon returning to the states, they settled in their hometown of Chesterton, and he began his 34-year career with NIPSCO (the last 17 in Plymouth). They spent 16 years of retirement in Tennessee where Bill could pursue his passion for being on the water fishing, swimming, and boating. Woodworking and gardening were among his other favorite hobbies. He and Nina also enjoyed traveling taking several bus tours. But family was most important to them, and they returned to Plymouth in 2013 to enjoy their precious grandchildren and family activities.

Bill was preceded in death by his parents and stepfather, Mark Wampler.

Funeral services will be held on Thursday, June 3, 2021 at 11:30 a.m. at Calvary Lutheran Church, 1314 N. Michigan Street, Plymouth with Rev. Eric Ahlemeyer officiating. Visitation will be from 10:00 a.m. until the start of the service.

Burial will be at a later date in the New Oak Hill Columbarium, Plymouth.

Memorial contributions can be made to the Center for Hospice Care 112 S. Center St. Plymouth IN 46563 or Calvary Lutheran Church.