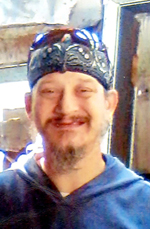 William Joseph King Sr., 48, of Plymouth, passed away on Tuesday, August 22, 2017 in his residence.
Bill was born December 3, 1968 in South Bend, Indiana, to Earl Leroy and Alinda (Brascher) King.
On November 5, 1988 in Churubusco, Indiana, he married Linda Marie Makowski; and she survives.
After Bill completed his high school education, he worked as a handyman around town. He was one who could fix about anything. He also had worked in the factory at one time.
Surviving is his loving wife; Linda Marie King of Plymouth, father; Earl Leroy King, daughter; Ashley Marie King, son; William Joseph King Jr., daughter; Chantelle Nicole King-McDaniel, Brandon Thomas King, and six grandchildren. Also surviving are his three siblings; John King, Josh King and Erin King.
He was preceded in death by his mother; Alinda King.
Per Billâ€™s request, no services are planned at this time.