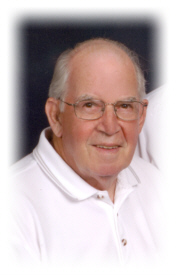 William Monroe “Jay” Biggs went home to the Lord at 8:05 a.m. Easter morning in the company and care of his loving family. He resided at River Walk in Plymouth.
Bill was born in Mishawaka, Indiana on August 11, 1929. He was the son of Royal N.R. and Nellie Bell (Young) Biggs.
He attended schools in Mishawaka-Beiger-Mary Phillips, Bingham and Mishawaka High School, receiving his high school diploma on June 4, 1947, while serving in the United States Army, which he had joined on February 4, 1946, at the age of 16.
Bill took his Basic Training at Fort Bragg, North Carolina, and was then assigned to the 2nd Infantry Division at Fort Lewis, Washington, in the Field Artillery. He held several different positions and then served in the Survey Section of the Headquarters Battery. As an instrument man, he attained the rank of Sergeant and was honorably discharged from the Army on August 4, 1947.
On October 16, 1948, in Mishawaka, Bill and Marilyn J. McClure were married. His jobs included the South Bend Lathe Works, the South Bend Supply Co., and the Reliable Dairy Company. In 1961, he leased a standard Oil Service Station known as Bill’s Service Center on the corner of Edwardsburg Ave. and Michigan Road in Elkhart, which he operated until 1978.
He then opened the Jefferson Auto Service in Plymouth, which he operated until his retirement in 1996.
Highly respected, Bill was known by his customers as being an ardent and fair business man.
The family lived at Lawrence Lake in Plymouth for 28 years before moving to the River Walk Community in Plymouth in 2008.
A great outdoorsman, he loved spending time with nature. He spent many years fishing and hunting, including deer and black bear with a bow and arrow.
He was a member of the Pretty Lake Trinity Methodist Church for over 30 years.
Bill is survived by his wife Marilyn who remained at his side and his children Betty Kay (Robert) Eley of Argos, Charles Jay (Christine) Biggs of Plymouth, and William “Gene” (Karen) Biggs of South Bend. Two grandsons; John “Jay” (Amy) Biggs and son Reisler and Ryan (Jenny) Biggs and son Colin also survive.
He was preceded by his parents, a brother, Edward R. Biggs and two sisters; Ruby I. Biggs and Kay Beckett.
Visitation will be held in the Johnson-Danielson Funeral Home, 1100 North Michigan St., Plymouth, on Wednesday, April 3, 2013, from 4 to 8 p.m. and for one hour prior to funeral services at 2 p.m. on Thursday, April 4, in the funeral home. The Rev. Tamara Boggs, pastor of the Pretty Lake Church, will officiate. Interment with Military Honors provided by members of the Plymouth American Legion Post 27, Veterans of Foreign Wars – Marshall County Post 1162 and the D.A.V. will be in the New Oakhill Cemetery, Plymouth.
Memorial gifts in Bill’s memory may be made to the Pretty Lake Church or to the Center for Hospice Care, 112 S. Center St., Plymouth, IN 46563.