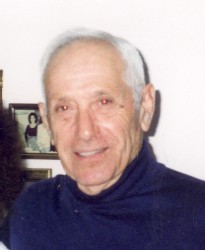 William Tallarita, 81, died of natural causes at his residence, 17560 W. 9th. Rd., Plymouth, on Monday, May 16, 2011, at 11:06 a.m.
William was born in Steger, Illinois, on March 20, 1930, was the son of Domenic and Mary Lamparelli Tallarita.
He joined the United States Army and served in the Korean War.
On April 17, 1955, at the Plymouth Trinity United Methodist Church, William and Sylvia Komanich were married.
A professional truck driver, he visited every state in the Continental United States, except two, while driving. He retired in 1995.
William enjoyed nature. He liked to collect rocks, fishing and hunting mushrooms. He was very adventurous and had a special bond with all animals.
He was a member of the American Legion, 40/8 Club, and the Pretty Lake United Methodist Church.
Surviving him is his devoted wife, Sylvia, Plymouth, a daughter, Elizabeth Tallarita, South Bend, and two sons: Nicholas (Lynda Kay) Tallarita, Plymouth, Anthony Tallarita, Bremen. A sister, Mary Bartholomew, California, and two brothers, Lawrence Tallarita, Illinois, and Domenic Tallarita, California, survive as well.
Five grandchildren: Tara Warner, Jennifer Richardson, Emily, Seth, and Olivia Tallarita also survive together with three great-grandchildren: Cedric Warner, Lily and Jonathon Diaz.
William was preceded in death by his parents, a brother, Anthony and two grandchildren.
A time of sharing for William will be on Thursday, May 19, 2011, from 4 to 8 p.m. in the Johnson-Danielson Funeral Home, 1100 N. Michigan Street, Plymouth, Ind.
Private services will be held in the New Oakhill Cemetery, Plymouth. Sue Irwin will officiate.
Burial will be in the New Oakhill Cemetery, Plymouth.
Memorial gifts may me made to The Center for Hospice Care 112 South Center Street Plymouth, IN 46563 or the Pretty Lake Methodist Church 8985 State Road 17 Plymouth, IN 46563