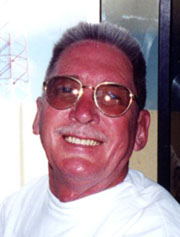 William V. Cunningham Jr., 81, passed away with his loving wife by his side at 8:20 a.m. Saturday, July 25, 2015.
William V. Cunningham, Jr. was born on June 20, 1932. That much is known for sure… Some of life’s mysteries are better left as such, an unsolved mystery. “Bill” as he has been known to most was raised in a Lutheran orphanage in Addison, Illinois, acquiring intermittent stays with foster families and shirttail relatives. Although his upbringing was less than traditional, he did acquire a deep and devout respect for his Maker and unwavering belief that God had been very good to him throughout his trials in his life. This positive and infectiously joyful spirit absolutely radiated from this man. His greatest joy in life was every moment that he got to spend in the company of other people. Bill had a delirious exuberance for life that could be matched only by the radiant sunshine itself. He couldn’t wait to get up in the morning to see what amazing adventures that very day would bring. His legacy will be those brilliant blue eyes and that dazzling smile with a glimmering hint of mischievous cunning. Bill will be missed by so many who had the pleasure of meeting him, but none so deeply as his wife and soul mate, Elizabeth (Armstrong). They were married in November of 1984 near the mountains of Colorado in Wheatridge. Although children were never to be a presence in their home, numerous pets, plants and people projects always were. A Celebration of Bill’s life will be held from 6-8 EDT p.m. on Tuesday, July 28, 2015 in the Kasper Room of the Catherine Kasper Home 9601 Union Road, Donaldson.
A special Thank You is in order for the genuine love exhibited effortlessly through the tender touch of each and every staff member who works at Catherine Kasper Home. Thank you for loving my husband in his final days on this earth.
In honor of Bill’s memory, charitable donations may be made to the local Animal Shelter of your choice, The Salvation Army, or to Catherine Kasper Home, P.O. Box 1, Donaldson, IN 46513.