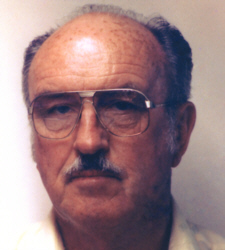 William A. Wilcockson, 84, died of natural causes in Miller’s Merry Manor, at 12:15 p.m. on Monday, August 17, 2009. Born in Gary, IN., on September 2, 1924, Bill was the son of William Awood and Agnes Beatrice Miller Wilcockson.
Bill graduated from Winamac High School with the class of 1942.
He enlisted in the U.S. Navy on April 28, 1942 and served as a 2nd Class gunner’s mate in World War II. Bill graduated from the University of Illinois with a degree in architectural engineering.
On April 21, 1951, in St. Ann’s Catholic Church in Monterey, IN., Bill and Alberta M. Master were married. Bill is survived by two daughters and two sons. They are Elizabeth “Betty” Wilcockson, and Rebecca Wilcockson, both of Plymouth, IN., and Richard (Jane) Wilcockson, Delton, MI., and James (Meg) Wilcockson, Plymouth, IN.
A self-employed architect, he was the only one in town for many years. Among his designs were numerous churches, the Marshall County jail, several Garden Courts, the pool in the park and numerous homes both in Plymouth, South Bend and Florida.
He was a member of the Masonic Lodge, the American Rifleman’s Association, Plymouth Moose Lodge, and the Lion’s Club.
On February 14, 1989 in Florida he married Karen Rhodes. He is survived by four step children. They are David and Jason Weeks and Kerri Meeks and Robin Ferguson, all of Tennessee.
Six granddaughters, one grandson and five great-grandsons, along with two great granddaughters three step granddaughters and two step grandsons also survive.
He was preceded in death by his parents.
Visitation will be from 11 a.m. to 12 p.m. on Saturday, August 22, 2009, at the Johnson-Danielson Funeral Home, 1100 N. Michigan St., Plymouth.
Funeral services for Bill will follow visiting with the family at noon in the funeral home. The Rev. Charles Krieg will officiate.
Burial will be in McKinley Gardens in Winamac, Indiana.
Memorial gifts in Bill’s memory may be made to the Center for Hospice and Palliative Care or the Diabetes foundation.