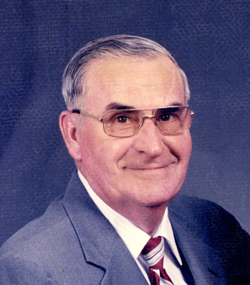 Willis G. Cowen, 96, a Plymouth resident for seventy years, passed away peacefully Thursday morning, September 6, 2018 in the Millerâ€™s Merry Manor, Plymouth.
Willis was born May 9, 1922 in Leiters Ford, to the late John William and Carrie A. (Braman) Cowen.
He married Edna (Whetstone) on November 6, 1943 in Larwill, Indiana; she preceded him in death on March 27, 2015. The loving couple had spent seventy-one glorious years by each otherâ€™s side and had three children: Bonnie, Dewey and Rodger.
Willis worked for twenty-two years at A.M. General, retiring in 1984.
He is survived by their three children: Bonnie S. Sherk of Rochester, Dewey G. (Sharon) Cowen of Galveston, and Rodger D. (Julie) Cowen of Plymouth. Also surviving are his loving seven grandchildren and eleven great-grandchildren.
He was preceded in death by his parents, wife, thirteen siblings, and a son-in-law, Rodger Sherk.
Visitation will be from 4-7 p.m. Monday, September 10, 2018 in the Johnson-Danielson Funeral Home, 1100 North Michigan Street, Plymouth.
Funeral services will be at 11 a.m. on Tuesday, September 11, 2018 in the Johnson-Danielson Funeral Home, with the Rev. Darci Sierachi officiating. Burial will be in the Tippecanoe Cemetery in Marshall County.
Memorial contributions may be directed to Heartland Hospice, 230 West Catalpa Street, South Bend, Indiana 46613 or to the donorâ€™s choice.