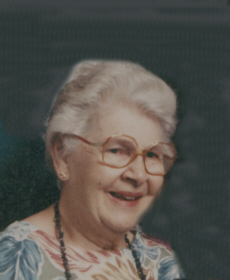 Former Plymouth resident Wilma J. Savage passed away Friday, June 13, 2008 at 4:30 p.m. in the Warsaw Miller’s Merry Manor. Wilma has resided in Warsaw since 1994.
Born in Bee, Nebraska on May 3, 1915, she is the daughter of Lawrence L. and Mary (Kantor) Maixner.
She received a degree as a dental hygienist from the University of Minnesota in 1943 and moved to Plymouth in 1949.
On March 3, 1955 in Plymouth she became the bride of Cleo R. Savage he would precede her in death on May 1, 1994.
In 1957 she joined the Plymouth office of Dr. Arnold Dunfee and provided professional dental care for the next 29 years. Wilma served as a President of the Indiana Dental Hygienist Association and was a past member of the Plymouth Chapter of B.P.W. – Business & Professional Women.
She was a former member of St. Michael Church Plymouth and following her move to Warsaw; she became active as a member of Sacred Heart Parish and was involved in Bible Study and the Altar Rosary Society.
Wilma maintained her independence, residing at home where she remained active and enjoy quilting.
The Savage family was blessed with two daughters, two granddaughters and two great-grandchildren. The are; daughter Luretta ‘Rita’ M. Sharp, who preceded in death and is survived by her daughter Deana Patterson of New Port Richey, Florida and daughter Marie A. Savage-Kindle and her daughter Hadley E. Gill both of Pierceton, Ind.
Also surviving are two brothers; Joe Maixner of Ft. Collins, CO and Roman Maixner of Wisconsin and two sisters include; Frances Jeske of Rio Rancho, NM and Marie Kelley of Oakland AR along with several nieces and nephews.
Wilma was preceded in death by her spouse, her daughter, a sister Celestine Maixner and a brother Raymond Maixner.
A funeral mass will be held at 11 A.M. Thursday, June 19th in Sacred Heart Catholic Church, 125 N. Harrison St., Warsaw. The Rev. Fr. Paul Bueter will officiate. Burial will follow in St. Michael Cemetery, Plymouth.
Memorial gifts may be made to the Sacred Heart Parish or St. Michael Church Plymouth.