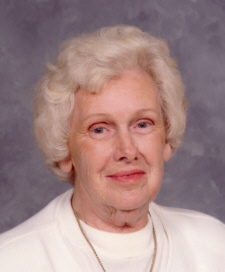 Wilma Jean Blubaugh, 84, a Baker St. resident, Plymouth, died at 5:20 p.m. on Friday, February 18, 2011.
Jeanie was born in Argos, Indiana, on June 29, 1926. She was the daughter of Donald and Cora Andrews Calhoun.
She graduated from Argos High School.
She married Raymond Blubaugh on June 29, 1947 in Plymouth, Indiana. Raymond died on January 9, 1998.
Jeanie was employed as a secretary for 20 years at the Divine Heart Seminary. She also worked at the Pilot News and at Ancilla College.
She was a member of St. Michael Catholic Church and a charter member of Beta Sigma Phi in Plymouth, joining in 1949.
Jeanie is survived by two sons: Mark A.(Darlene) Blubaugh,Plymouth,Indiana and Michael R.(Sharon) Blubaugh, Plymouth, Indiana.
She is survived by four grandchildren: Kelsey (Bryan) Bell, Danielle (Matt) Gantz, Jennifer (Stephen) Guriel all of Plymouth and Jeremy Blubaugh of Minneapolis, Minnesota. Also surviving are three great grandchildren: Tynley and McKoy Gantz of Plymouth and Carter Guriel of Plymouth.
Two brothers survive as well: Richard Calhoun and Charles (Jennifer) Calhoun, both of Argos, along with numerous nieces and nephews.
Jeanie was preceded in death by her parents, her husband Raymond, and two brothers, Don and Robert Calhoun.
Visitation with the family will be in the Johnson-Danielson Funeral Home, 1100 North Michigan St., Plymouth, on Monday, February 21, 2011, from 4 to 8 p.m. and for one hour prior to the funeral services on Tuesday.
Funeral services for Jeanie will be at 11 a.m. on Tuesday, February 22, at the Johnson-Danielson Funeral Home. Father William Kummer will officiate. Entombment will follow in the New Oakhill Mausoleum.
Memorial gifts in Jeanie’s name may be made to the Center for Hospice and Palliative Care 112 South Center Street Plymouth, Indiana 46563 and St. Michael Church 611 North Center Street Plymouth, Indiana 46563.
Funeral Director – Kevin L. Russell – kevin@johnson-danielson.com