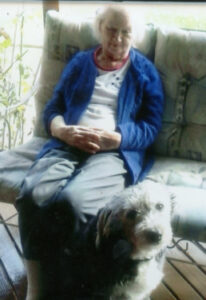 Wilma L. Elkins, 82, and Plymouth resident since 1954, passed away peacefully in her home on Sunday afternoon, February 14, 2016.
Wilma was born in Lakeville, Indiana on February 4, 1934 to Sidney and Dessie Vera (Fisher) Smith. She attended Lakeville High School.
On February 6, 1954 in Lakeville, Wilma became the bride of Harold F. Elkins, and the couple soon after made Plymouth their home. Harold would precede her in death on March 25, 1985.
She worked at Chuck & Marie’s Restaurant and Munday’s Restaurant in Plymouth for several years and became acquainted with many.
Wilma enjoyed stopping at garage sales, crocheting, embroidering and attending flea markets. She was a former member of the Women of the Moose in Plymouth.
She is survived by her children: Helen Louise (John) Schooler, a step-daughter of Bremen, daughters; Vicky S. (Edward) Hahn of Plymouth, Jean Ann (Marc) Linsner of Marco Island, FL, and Becky L. (Ricky) Samuels of Bourbon as well as, 9 grandchildren, 16 great-grandchildren and 4 great-great grandchildren.
She was preceded in death by her husband, parents and granddaughter, Joleen Spindler.
No public services will take place and her body will be laid to rest next to her husband in Oak Hill Cemetery, Plymouth.
Memorial gifts may be made to the family.