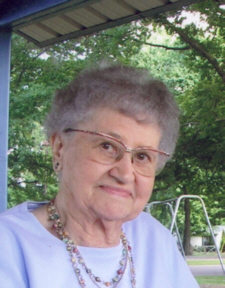 A lifetime resident of Marshall County, Wilma Mae Martin died on Tuesday, August 10, 2010 at Miller’s Merry Manor in Walkerton, Indiana. Wilma Mae, born near Bremen on February 16, 1918, was the oldest of 7 children born to Donald and Marie Annie Laurie Reese Winrotte. She graduated from LaPaz High School with the class of 1935. Wilma wanted to teach and was able to attend Marion College in Marion, Indiana (now called Indiana Wesleyan University). She graduated in 1938, with a 2 year Normal School Teaching Degree and a life license. This was the last year the Normal degree was awarded. On January 11, 1941, in Tyner, Wilma Mae Winrotte and Walter John Martin were married. Wilma and John owned a booth at the Farmer’s Market in South Bend, where they sold an extensive selection of vegetables. John died on December 31, 1995, shortly after they sold the farm. A school teacher in Tyner, Teegarden and then Walkerton Elementary, Wilma was known for her ability to teach children to read. She often had the insight and fortitude to help students who struggled the most. Parents commented she gave their son or daughter a good foundation for their education. Wilma’s entire teaching career was in same school Corporation, and she sometimes taught 2 generations of families. Throughout their adult lives, she was called “Miss Wilma” by some of her early first graders. Wilma enjoyed collecting owls, which she displayed in the hallways. She had a lovely flower garden in earlier years. She was good at find-a-word puzzles. Wilma was an avid reader, reading both the Plymouth Pilot and the South Bend Tribune until her death, and she liked semi-love stories. Wilma was compassionate, very considerate, a hard worker and patient, with a gentle, giving heart. Wilma is survived by two daughters and a son. They are Cynthia/Cindy L. Martin, Walkerton, Indiana, Kathleen/Kathy M. (Hugh) Geren, Clearwater, Florida, and Phillip/Phil J. (Pamela) Martin, Goshen, Indiana.
She is also survived by four grandchildren; Matthew (Melissa) Geren, Cari Martin, Andrew (Elizabeth) Martin, and Sarah (Jeremy) Dail.
A great grandchild Hannah Martin survives, and another great-grandchild is due in November.
A brother, Keith Elmer Winrotte, Three Rivers, Michigan and a sister, Juanita Wilkins of Lakeville, Indiana, also survive.
Wilma was preceded in death by her husband John, a grandson, Phillip J. Martin, Jr. three brothers; Victor, Wayne and Duane Winrotte and a sister Mary Downing.
Wilma was a devoted member of the Tyner United Methodist Church, the Tyner Rebekah Lodge and the Black Bridges Club. She held memberships in the Marshall County Retired Teachers Organization, the Indiana State Teachers Association and the Walkerton American Legion Auxiliary.
Friends are invited to share memories and visit with one another at the Johnson-Danielson Funeral Home, 1100 N. Michigan St., Plymouth, on Saturday, August 14, 2010, from 2 to 7 p.m.
A Rebekah Lodge service conducted by the Tyner Lodge will be held at 6:30 pm Saturday.
Funeral services for Wilma Martin will be held in the Tyner United Methodist Church at 2 p.m. on Sunday, August 15, 2010. The Rev. Mike Dixon will officiate. Burial will be in Tyner Cemetery, Tyner, Indiana.
Memorial gifts in Wilma’s name may be made to the Wilma Martin Scholarship Fund at the Marshall County Community Foundation.