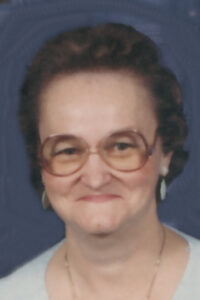 Wilma Troyer, 73, 19411 15th Road, Culver, IN., died of natural causes at her residence at 12:39 p.m. on Wednesday, October 8, 2008.
Born in Hamlet, IN. on November 17, 1934, Wilma was the daughter of William and Myrtle Crabb Whitehead. She graduated from Knox High School with the class of 1952.
On August 11, 1954, in Rochester, IN., Wilma and Lewis Troyer were married.
For 20 years, doing assembly work, Wilma was employed at Federal Mogul in Leiters Ford, IN.
She was an active and diversified person. Wilma crocheted and rode motorcycles. She collected carousel horses and was a consummate Elvis Presley fan. She gardened and canned her produce.
Most of all she enjoyed being with her family.
Wilma was a member of a Rochester ladies’ bowling league. She is survived by her husband and by a two sons and a daughter.
Her son is Richard (Deborah) Troyer of Troy, AL., and by their four sons: Richard Troyer, Jr., and Steven L. Troyer, both of Troy, Ala.: Glen S. Troyer, Cody, Wy., and Travis J. Troyer, Plymouth, IN.
Two great-granddaughters: Hanna Troyer, Plymouth, IN. and Haley Troyer, St. Petersburg, FL., also survive.
Her son is Brent Allen Troyer, Culver, and his son Joshua Allen Troyer, Plymouth
Cheryl Lynn Lowry, Wilma’s daughter, of Delong, IN., also survives along with her sons and daughter: Brian Keith (Renessa) Troyer of Goshen, IN.: Nicole Renee Wilson, Ark., and Cory Edward Lowry, Delong, IN.
Eight great-grandchildren are: Shelby K. Troyer, Rochester, Indiana and Logan Wayne Troyer, Goshen: Deric J. Wilson, Zachary Lewis Wilson, Alexis K. Wilson and Mikalaya Wagner, all of ARK., also survive, together with Cameron Lance Lowry and Merissa Lowry, Goshen, Indiana.
A daughter-in-law, Tammy Troyer, Warsaw, IN., and two grandsons and a granddaughter, survive as well. They are Kevin Michael Troyer, Austin, Texas, and Brandin and Sydney Renae Troyer, both of Warsaw, IN.
Wilma was preceded in death by her son, Leslie Wayne Troyer, a sister, Lois Triplet and her parents.
Friends are invited to share memories and celebrate the life of Wilma Troyer from 4 to 8 p.m. on Friday, October 10, 2008, in the Johnson-Danielson Funeral Home, 1110 N. Michigan St., Plymouth.
Funeral services for Wilma will be held at 1 p.m. on Saturday, October 11, 2008, in the funeral home. Floyd Allen of the Delong Lighthouse will officiate.
Burial will be in the New Oakhill Cemetery, Plymouth, Indiana
Memorials in Wilma’s name may be made to charity of the donor’s choice.