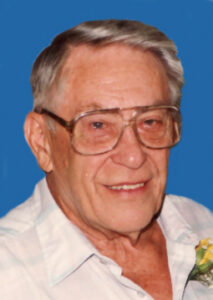 Winston Gladwell Montague, 93, formerly of Bourbon, IN and Bradenton, FL, died of natural causes at his residence on Sunday, January 10, 2010, at 9:20 a.m.
Born in McComb, Ohio, on August 25, 1916, Winston was the son of Riley Isaac and Mabel Rader Montague.
He attended school in McComb, Ohio. He was an Ohio Golden Gloves Boxing champion.
Serving his country in the U. S. Army in World War II, Winston fought in the Battle of the Bulge. He was awarded the Purple Heart for his injuries.
Winston was married to Mary Rader, deceased.
Winston and Anna Marie King were married in Columbia, S.C. Anna died on July 16, 2001.
For a time Winston drove a Greyhound bus, then became an over-the-road truck driver.
He loved to tinker with things, talk to people, travel and fish.
He was a member of the Bourbon First United Church of Christ and a former member of the Bourbon Masonic Lodge, #227 F. & A.M.
Winston is survived by eight daughters and three sons. His daughters are: Sally (Roger) McPeak, Pittsburg, TX., Jeanene (Troy) McGuire, Snohomish, WA., Aleta Montague, Winona Lake, IN., Karen Horoho, Kokomo, IN., Elaine (Bud) Wetzel, Winona Lake, IN., Debra (Marvin) Eberly and Cheryl (Richard) McDonald, all of Warsaw, IN. and Nancy Rockhill, Westfield, IN.
His sons are: Tom (Val) Montague, Westminster, CO., Richard (Becki) Montague, Westfield, IN., and Michael (Karen) Montague, Downers Grove, ILL.
Forty-three grandchildren, 44 great-grandchildren and 17 great-great-grandchildren also survive.
He was preceded in death by his parents, his wife and a son, Jimmy. Three brothers, a sister and several grandchildren have died as well.
Friends are invited to celebrate Winston’s life with his family on Thursday, January 14, 2010 from 4 to 8 p.m. at the Johnson-Danielson Funeral Home, 1100 N. Michigan St., Plymouth, IN.
Winston’s funeral will be held in the funeral home on Friday, January 15, 2010, at 1 p.m. The Rev. Charles Krieg will officiate. Military rites will be accorded to Winston by the Plymouth American Legion Post 27 and the V.F.W. Post 1162. Burial will be in New Oakhill Cemetery, Plymouth, IN.
Memorial gifts in Winston’s name may be made to the American Lung Association, 802 W. Wayne St., Ft. Wayne, IN. 46802-3996.