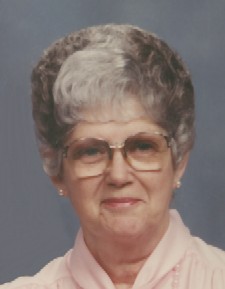 Wreatha L. Weigle, 87, a Plymouth resident since 1938, coming from Veedersburg, Indiana, died in Miller’s Merry Manor, Plymouth at 8:05 p.m. on Wednesday, March 19, 2008.
Wreatha was born in Veedersburg on June 7, 1920. She was the daughter of Ray and Berniece I. Leath Rusk.
She graduated from Veedersburg High School with the class of 1938.
On March 28, 1941, in Plymouth, Wreatha and Charles L. “Roy” Weigle were married. Roy died on November 4, 2001.
A homemaker, Wreatha loved to travel. Her favorite place was Hawaii and she visited there four times. She was quite a shopper and enjoyed shopping. She collected ceramic birds, butterflies and angels.
She was a member of the Trinity United Methodist Church in Plymouth.
Wreatha is survived by two sons and two daughters. Her sons are David A. and Sandy Weigle, Arlington, Texas and Richard W. and Arlene Weigle, Plymouth, Indiana.
Her daughters are Merry L. and Robert Price and Janice M. and Steve Miller, all of Plymouth, Indiana.
Seven grandchildren, nine great-grandchildren and one great-great grandchild also survive along with a brother, Dean Rusk, Lafayette, Indiana, and three sisters, Barbara A. Roark, Davenport, Florida, Betty E. Harding, Attica, Indiana, and Mary E. Snyder, Warner Robins, Georgia.
Wreatha was preceded in death by her parents, her husband and a brother, Wayne I. Rusk.
Friends are invited to celebrate the life of Wreatha with her family on Tuesday, March 25, 2008, from 1 to 3 p.m. in the Johnson-Danielson Funeral Home, 1100 N. Michigan St., Plymouth.
Funeral services for Wreatha will be held on Tuesday, March 25, 2008, at 3 p.m. in the funeral home. The Rev. William Kaster, pastor of the Trinity United Methodist Church, will officiate.
Burial will be in New Oakhill Cemetery, Plymouth.
Memorial gifts in Wreatha’s memory may be made to the Trinity United Methodist Church or a charity of the Donor’s choice.