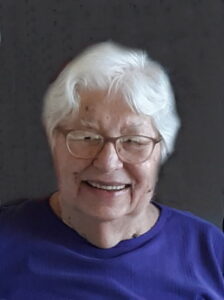 Yolanda Roush, 92, passed away on Tuesday, February 15, 2022, at St. Joseph Regional Medical Center, Plymouth. Born on September 22, 1929, in South Bend, Yolanda was the daughter of Alex and Julia (Rebics) Arch. She graduated from Washington High School with the class of 1947.

She was a loving wife and mother to their four children. When the kids were all grown and out of the house, Yolanda went to work for her son, Roy Michael Roush, as a receptionist at his law firm in Plymouth. She would retire after 15 years in 1991. Yolanda was a devout member of St. Michael Catholic Church where she was part of the Altar Rosary Society. She was also a member of the Marshall County Farm Bureau.

She was preceded in death by her husband Kenneth in 2021, a daughter, Susan Marie, her parents, son-in-law Gary Richey and siblings: Mary Piller and Alex Arch Jr.

Memorial contributions can be made to St. Michael’s Catholic Church, 613 N. Center St., Plymouth, IN 46563.