While some funeral homes simply promote the owners and the fact that they are locally owned, we acknowledge that the level of service that is provided by our funeral home could not be achieved if it were not for the efforts of our dedicated staff.

James W. Weldy
Jim is a 1978 graduate of Worsham College of Mortuary Science, Chicago, IL. While serving families in funeral service for the past 40 years, Jim continues to serve on a Federal Mortuary Disaster Team through the Department of Health and Human Services. He has responded to many mass fatalities, such as 9/11, Hurricane Rita and Katrina, and the earthquake in Haiti.

He and his wife have two children, Brian (Beth) Weldy of Urbana, IL and Jamie (Ryan) Beckwith of Plymouth, IN. Brian and Beth have blessed them with two grandsons, Ethan and Oliver. Jim and Terri purchased the funeral home in 2017. Members of First United Methodist Church, Plymouth; Jim is also a member of the American Legion, Post #27 and the Plymouth Lions Club.

Terri Weldy
Terri has served families in the financial and insurance market since the late 1970’s. Most recently, she managed two bank branches in Central Illinois, prior to moving to Plymouth. She is a native of Havana, IL. Terri graduated from Havana High School and Spoon River College. She is responsible for the financial operations of the funeral home and The Remembrance Centre.

Terri and Jim are members of First United Methodist Church. They have two Boxer dogs, Tito and Gracie.

Jamie Beckwith
Jamie has an extensive history in retail management and customer service. In 2015, Jamie graduated from the University of Illinois in Springfield with a Bachelors in Accountancy and a double minor of Business Administration and Management. Jamie prides herself on providing excellent service through the customer experience and looks forward to continuing the standard that Johnson-Danielson Funeral Home has established over the years. While Jamie does not have a professional history in funeral service, she grew up in the industry and is the daughter of owners, Jim and Terri Weldy. Jamie will be attending Mortuary School in the Fall of 2021 and is thrilled to have great mentors at Johnson-Danielson to help guide her. She is also on the Board of Directors at Dustin’s Place, a free grief support center for children and adults located in Plymouth. Jamie recently moved to Plymouth from Lowell, MI with her husband, Ryan, and their two kitties, Ali and Lucy. They enjoy traveling and spending time with their family. Jamie and Ryan look forward to getting to know the families in the community.

Caryn Durski
Caryn E. (Escher) Durski is a native of Mishawaka, Indiana and a 2005 graduate of Mishawaka High School. After attending Indiana University – South Bend, she moved to Chicago. There she worked for Smith-Corcoran Funeral Homes while attending Worsham College of Mortuary Science in Wheeling, Illinois. After graduation in September of 2011, Caryn moved to Yankton, South Dakota to serve her apprenticeship at Opsahl-Kostel Funeral Home & Crematory. Upon getting her license to practice funeral service in South Dakota, she got the opportunity to move back closer to family and friends and moved to Plymouth to join the staff of Johnson-Danielson Funeral Home in September of 2012. She is a 2014 graduate of the Leadership of Marshall County Program and is on the Center for Hospice Care Ethics Committee. Caryn, her husband, Joe, and their children, Neala and Orrin, are members of St. Michael’s Church, Plymouth. They love attending Notre Dame Football games and tailgating.

Jordan Mayfield
Jordan Mayfield is a native of Elkhart Indiana graduating from Concord High School in 2001. Upon graduating he proudly served his country in the Army and spent 30 months in combat during Operation Iraqi Freedom, where he received the Combat Action Badge for “Courage under Fire.” After returning from his second deployment he spent his last five years of service providing full military honors for 3,000 fallen veterans earning the “Honor Guard Tab” from Arlington National Cemetery. After retiring from the Army in 2015 as a Senior Non-Commissioned Officer, he attended Vincennes University graduating with distinction obtaining his degree in Mortuary Science. Jordan joined the staff at Johnson-Danielson in August, 2019 mid through his internship and became licensed in December of 2019. He and his wife Amanda have two children, Gracie and Luke, and attend Christian Center Church in South Bend 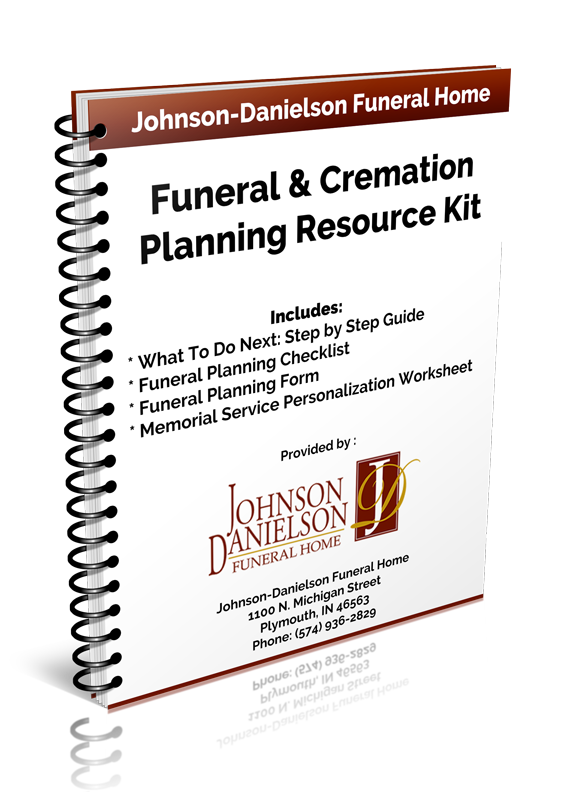